The International Energy Agency’s (IEA) 450 scenario has been used as the 2D demand scenario, as detailed in the World Energy Outlook 2016 (WEO). The 450 scenario is consistent with a 50% chance of delivering a 2°C global warming outcome, which is then worked back to estimate a demand scenario with this result. From a climate perspective, this is not great odds of achieving this outcome, therefore the scenario should be viewed at the generous end in terms of the levels of fossil fuel demand it accommodates. Demand is taken from the latest IEA scenarios on a fuel-by-fuel basis, and by region. The 450 scenario is then compared to a business as usual scenario, which reflects identified base case potential supply in the database used. At a macro level, this is slightly higher than the IEA New Policies Scenario (NPS).

As indicated by the TCFD, applying a consistent comparable 2D scenario enables investors to understand the relative exposure of companies within a portfolio. This does not prevent companies or other stakeholders from providing analysis of other scenarios they believe are more likely or more desirable.

The UNFCCC Conference of the Parties (COP) in Paris at the end of 2015 brought a focus on a range of outcomes either side of the 2D scenario, including the Nationally Determined Contributions (NDCs). These plans, which focus on commitments by individual countries for 2020-30, are currently not sufficient to achieve the 2D scenario, but could be ratcheted up in review phases.

The NPS is the IEA’s modelling outcome of where the world is currently headed, and takes into account the NDCs. The IEA NPS results in a carbon budget which is equivalent to a 50% likelihood of limiting anthropogenic warming to around 2.7°C. It is worth remembering that the IEA scenarios are updated each year and the latest NPS would not present much of a test compared to current industry plans where they already largely reflect the current policy environment. Trying to identify the gap between industry plans and NPS is of limited value.

Many investors are also aware of the wording from the UNFCCC Paris COP regarding limiting anthropogenic warming to “well below 2°C”, and pursuing efforts to “limit the temperature increase to 1.5°C”. These kinds of scenarios would present a very strict carbon budget requiring instant and drastic action to curtail emissions and keep fossil fuels in the ground. The IEA and IRENA highlighted some of the challenges to achieving an outcome below two degrees of warming in a recent analysis. There are limited details on the implications of a 1.5°C scenario for fossil fuel demand, therefore it is not currently possible to analyse in the same way as the IEA 450 scenario. The latest IEA Energy Technology Perspectives 2017 has produced a scenario which delivers a 50% probability of 1.75 degrees of warming which could be used as the basis for future analysis.

Scenarios are often misrepresented. Ultimately they are one version of the future, not a prediction or forecast. Use of a particular scenario does not mean that an organisation thinks it is the most likely or that it agrees with all of the underlying assumptions. Practically speaking, to conduct this analysis, there are very few publicly available scenarios that provide the detail on fossil fuel demand necessary to model the supply requirements. The IEA scenario provides a feasible reference point which is accepted by the industry. The most advanced companies already produce a range of scenarios to inform their thinking, and the reference scenario is not intended to limit or discourage companies going beyond it.

In order to allocate the carbon budget from a given scenario to the company level, it is necessary to apply a timeframe. Oil and gas carbon budgets are derived from the 2016 IEA 450 scenario for the period 2017-2035. This is then correlated with the equivalent amount of oil and gas production over this period and the amount of capex that would be required through 2025 to deliver this supply. Considering production and it’s timing, rather than just reserves data, is essential to calculating the potential impact on revenues if investors wish to integrate this thinking into Net Present Value (NPV) sensitivity tests, as demonstrated later in this report.

The oil and gas carbon budget to 2035 for CO2 emissions based on the IEA 450 scenario is 320 GtCO2 split 59% for oil and 41% for gas. This amount of production is then compared to the business as usual scenario from the industry database to understand how much potential production and capital expenditure is excess to requirements in this scenario. It should be noted that not all of the surplus projects will have been granted a final investment decision or are certain to go ahead at this stage. In fact, this is the benefit of this scenario analysis – there is still time to review these decisions and for shareholders to engage on the capital expenditure plans of the company. For those companies that have already decided to align with a lower demand outlook, they can confirm that they have taken those options off the table. At present there is relatively little information about the status of different projects available for investors.

The overhang of potential emissions from business-as usual oil and gas use which exceeds the IEA 450 carbon budget to 2035 is as follows:

This means that under the business as usual scenario the oil and gas industry would produce enough oil and gas to result in 380 GtCO2 by 2035.

The chart below gives an indication of how the total volumes of oil and gas consistent with the 2D scenario might be produced over the period to 2035 based on the base case timings of the projects within the 2D budget in our data. The annual production level of oil and gas combined is fairly consistent with today’s levels, but with an increasing share of gas over time. This is obviously a significant deviation from the continued growth expected in industry business-as-usual scenarios. However in the IEA 450 scenario oil and gas consumption does not disappear overnight as further supply is needed to meet demand. If a stricter budget were applied, then obviously less new production would be needed. The scenario sees a shift in the oil/gas mix from a 60:40 split to a more even distribution by the end of the period. This equates to a fall in oil production and growth in gas production.

This production profile is indicative, being based on the aggregate production required to meet demand in the IEA 450 Scenario over the period 2017-2035, rather than the actual pathways for oil & gas demand in the scenario. The base case timings of the projects within the 2D budget are used to calculate the chart, hence it will not match fossil fuel supply in the 450 Scenario on a year by year basis. 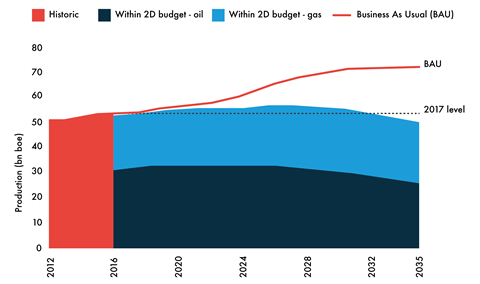