In this case study, two investors, Man Group and nordIX AG, explain their assessment of the credit risk of Steinhoff International (SNH), how they formed their view and reached an investment decision that was driven by growing governance concerns about the company.

Steinhoff International (SNH) is a large conglomerate focused on discount products in the general (non-food) retail space. Originally founded in Germany but headquartered in Stellenbosch, South Africa, Steinhoff has a primary equity listing in Frankfurt and secondary listing in Johannesburg. In 2017, according to company filings, roughly 60% of the company’s revenue came from Europe, 32% from Africa and the rest from Australasia and North America.

Over the past 50 years, Steinhoff grew from a small, local retailer into an international conglomerate. The majority of this recent growth was achieved through acquisitions. Recent acquisitions include Poundland, a UK discounter, Pepkor, a South African-based discounter, Conforama, one of the largest furniture retails in Europe, and Mattress Firm, a US-based bed and mattress company.

Steinhoff’s debt capital structure consisted of loans, bonds and convertible bonds. The €1.1 billion 2023 convertible bond issued in 2016 was the largest of the liquidly trading instruments. Steinhoff was rated Baa3 by Moody’s and Aa1.za on the South Africa local scale (based on Bloomberg data and Moody’s Investors Service).

Our discretionary credit and convertible funds were either outright short or underweight Steinhoff risk. Our negative view was reached after our bottom-up credit research could not fully explain the company’s revenue to cash flow conversion. In addition, the company’s long history of growth by acquisition made us uncomfortable. Our discretionary fixed income funds generally tend to avoid companies that make substantial acquisitions in many regions around the world as the integration and management of these deals has proven troublesome for many companies in the past. In addition, the limited industrial logic behind many of the acquisitions, due to different geographical end-markets and product categories of acquired companies, coupled with opaque financial disclosures, raised red flags about potential financial statement manipulation.

In August of 2017, a German magazine reported that the company’s CEO Markus Jooste was being investigated for possible accounting fraud. In addition, there were allegations around related party transactions involving current and former employees that were not properly disclosed by the company. Although these allegations were rebutted by the company, when we engaged with rating agencies and other market participants we were still not convinced that the market was correctly valuing this downside risk.

Governance is one of the most important factors to evaluate when investing in fixed income securities. Bondholders are looking to be repaid in full and poor governance can easily jeopardise this, changing the current market price of the bonds and potentially impacting the final maturity.

Governance is also notoriously hard to score on an absolute basis or model into traditional forward-looking credit metrics. We tend to use a red flag system where credits that are flagged with poor governance are avoided. Steinhoff’s history of serial acquisitions involving limited industrial logic, combined with the accounting fraud allegations, raised a red flag for us.

The August 2017 news around alleged accounting irregularities initially pushed yields up by about 1 percentage point and dropped bond prices. Further questions raised in November had a similar impact, but the biggest drop came in early December 2017 when the company announced that the auditors had not signed off on the final results for the year. CEO Markus Jooste resigned the next day (see figure below).

The Steinhoff case illustrated again the importance of using ESG analysis in fixed income investing. Environmental and social issues can be more difficult to include in traditional credit analysis but governance has always been and always will be a key factor in determining the creditworthiness of an issuer. For Steinhoff, it was less the change in specific traditional credit metrics that gave us pause, but more the overall governance and strategic issues with the company. Situations like this remind bondholders of the tremendous downside risk that can arise when a company’s governance is called into question.

Steinhoff bond 1.875% expiring in January 2025 has been trading significantly below par since its issuance. Sources: Bloomberg and Moody’s Investors Service

Although SNH’s bond suffered significantly since the company admitted to accounting irregularities in December 2017 and the CEO, Christoffel Wiese, subsequently departed, there had been several warning signals – mainly governance-related – that raised concerns prior to that. For instance, the CEO was very influential, holding 23% of SNH’s international and outside retail interests in high yield issuers like Iceland Foods via Brait SE. Furthermore, SNH expanded aggressively since moving its primary share listing from Johannesburg to Frankfurt in 2015, acquiring Britain’s Poundland, US-based Mattress Firm and Australia’s Fantastic. Between 2013 and 2017, SNH spent almost €5 billion.

MSCI downgraded SNH’s ESG rating to BB on 21 December 2015, driven by poor governance and accounting standards and, on 21 December 2017, further to B, reflecting the escalation of the accounting scandal and the need to restate the company’s financial results26. On 7 December, Moody’s also downgraded SNH from Baa3 to B1, citing uncertainties and implications for the company’s liquidity and debt capital structure arising from an announcement by its supervisory board on 6 December 2017.

nordIX AG noted that there were already red flags about corporate governance in the 2016 accounts due to the lack of important cash flow data, as reported by Bloomberg. However, using a quantitative model based on discriminant analysis as part of the credit investment process, Christoph Klein created a score (CK-rating) that can be calibrated to a rating and compared with that of other CRA ratings.

Metrics used in the traditional credit risk models include the ratio of free cash flow to total liabilities; the stability of operating cash flows (the mean of cash flow from operations divided by the standard deviation of cash flow from operations); retained earnings divided by total assets (reflecting historical profitability and a company’s dividend and shareback policy, which can signal aggressive shareholder value); and total market value size.

The table ahead shows how the above methodology contributed to our negative view (see figure below). Using 2015-2016 accounts and making simulations for 2017, based on, for example, different evaluations of the company’s assets and what could be liquidated to raise cash as well as possible penalties and restructuring charges, the CK-rating would have produced a score of -1.71, equivalent to a B2 (which then can be compared to a CRA rating). 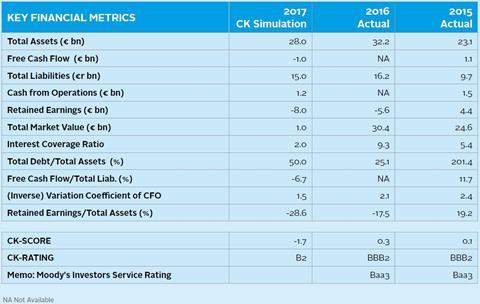