The impact of energy and climate on sovereign risk

Case study by Beyond Ratings

Beyond Ratings observes that the socioeconomic and geopolitical impact of energy and climate change on sovereign risk is underestimated. Recent academic research conducted with us estimates that the elasticity of GDP to energy consumption is about 60% (more than 6%-10% as is generally understood by conventional macroeconomic theory), and shows that it is a one-way causal relationship: from primary energy consumption to GDP growth.

Why energy and climate matter for sovereign risk analysis

Traditional economic thinking has been shaped by the idea that production is a function of labour and capital, leading us to underestimate the role of energy in the economy. Historically there is a strong link between GDP and energy consumption. 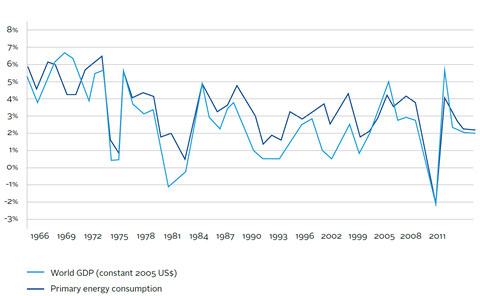 More recently a strong link has been observed between heavy credit ratings downgrades and low energy independence, as in the case of Greece, Italy, Spain, Portugal or Ireland. 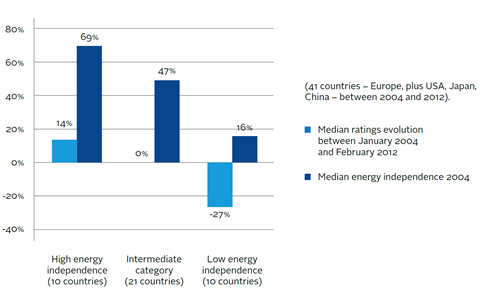 We have created a rating dedicated to energy, and to a lesser extent climate change, by analysing against the framework below. This rating complements those of the mainstream rating agencies.

The core issues within our framework’s categories include for example:

Indonesia has developed quickly since being severely hit by the 1997 Asian financial crisis. In January 2014 it raised US$4 billion in Asia’s largest sovereign, dollar-denominated bond issue since 1998.

Indonesia’s hydrocarbon resource is maturing, as evidenced by the decline of oil production and the plateau of gas production. This calls for a shift in the economy towards higher value-added sectors. Such a transition requires a significant increase in energy efficiency in most sectors to boost production. This could be challenging in the shortand medium-term as Indonesia’s energy supply system is under pressure due to weak infrastructure and an abnormally high absolute level of residential energy consumption compared to other countries.

The number of people connected to the power grid is growing at a high rate, 3% per year, which will benefit economic growth. The transition towards a more energyefficient economy is underway: recent decisions to cut energy subsidies and develop renewables in remote areas indicate a growing awareness of energy issues. In the mid- to long-term, renewable energy sources could be developed and related production capacities could turn out to be valuable assets.

The energy sector, which is primarily oil and gas, contributes about 20%-30% of Indonesia’s government budget (or 3.3%-4.0% of GDP). Within energy, oil and gas represent around 8%-9% of the total tax revenues and 60%-70% of the non-tax revenues (general economic gains, and dividends as a shareholder of national companies). Energy’s net contribution to the budget has been heavily distorted by subsidies, with Indonesia among the top 15 heaviest energy subsidisers in 2012 at 3.0% of GDP. However, President Joko Widodo, elected in July 2014, announced in November 2014 that energy price subsidies would be drastically reduced. General government gross debt is low at about 25% of GDP.

Indonesia is not facing armed conflicts but it has experienced domestic unrest, which is partly related to natural resources, such as separatism movements in Aceh and Papua, and some such risks remain. The country suffers from some corruption in the energy sector (e.g. corruption scandals at Pertamina). Agriculturally, the country has strong independence and energy-efficiency in terms of production methods, but it remains highly vulnerable to energy/climate shocks due to the dominance of the primary sector and high poverty levels (45% of the population live on less than US$2 per day). CO2 emissions are low, but deforestation is pushing them up. The country relies on coal assets, which may become stranded over the medium term. The governance framework for the extractives industry is better than average: the Resource Governance Index rates Indonesia 14 out of 58. Joko Widodo’s decision to cut particularly inefficient subsidies is welcome – 80% of the subsidies do not benefit the poorest – but further attention should be paid to the way the poorest part of the population will be protected.

Many years of energy commodities exports got Indonesia used to having a healthy external position, but declining oil production has caused net oil imports to grow since 2004. The country is now covering its external financing needs using its central bank reserves, which though comfortable are now declining.

Disclaimer provision for BEYOND RATINGS’ analysis