How to integrate ESG issues into executive pay: a review of utilities and extractives

The research analysis below summarises the practices of 84 extractive and utility companies included in major stock indices in North America, Europe, and Australia.

The research captured fifteen indicators related to ESG and pay practices for each company:

Every ESG-related performance factor mentioned by each company was captured and categorised into six groups: under four broad headings of Environmental, Social, Governance and Integrated Metrics (where ESG factors across multiple categories are tied together into one metric, usually a scorecard); and two more specific headings, Safety and Climate Change, given their particular pertinence for companies in the utility and extractive sectors.

The in-depth analysis of public filings for 84 companies revealed that:

Of the 70 companies that incorporated ESG issues into executive pay plans: 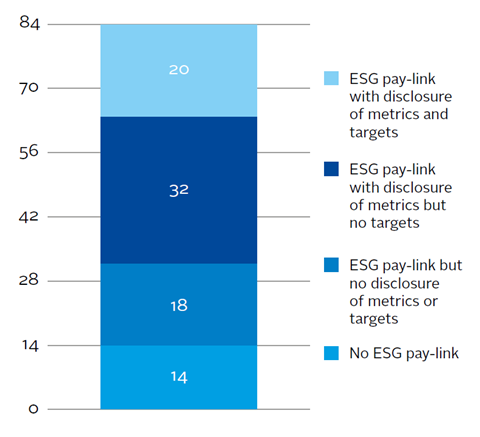 For the 70 companies across the two sectors that incorporate ESG factors, figure 2 summarises how they are integrated into pay, and which issues are most frequently employed. Analysis of the data in figure 2 reveals the following patterns on metrics: 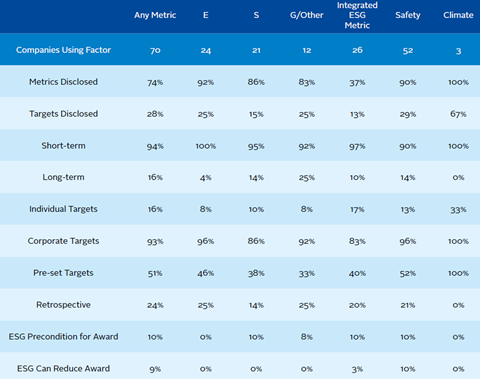 The research indicates that 80% of the sample incorporated some ESG link in pay decisions. Of these companies, 65% disclosed metrics and 35% disclosed specific quantitative targets alongside them.

Safety is a key issue for the industry, therefore it is not surprising to see it featuring heavily in the data. While safety has a potential impact on physical, regulatory and reputational risk, this raises the question of whether there is an excessive focus on one key issue, as no other ESG factor was employed by more than half of companies reviewed. Social factors (excluding safety) are the second most integrated at 32%, but this does not seem adequate given the wide variety of social issues that could impact company performance, such as employee engagement and retention.

No utility companies in the sample incorporated climate change metrics such as carbon emissions into executive pay, despite their own sustainability reporting as well as industry analysts and research experts referring to climaterelated issues as a material risk.

A few companies’ programmes stood out as having more sophisticated designs, for example, incorporating specific ESG hurdles before bonuses can be earned under other performance metrics. At the Australian utility SP Ausnet, long-term incentives cannot be earned when fatalities occur, and at the German utility RWE, ESG reporting and employee satisfaction metrics serve as the basis for a bonus-malus that can reduce awards earned in other ways.

As with utility companies, safety was the most commonly used ESG issue in pay, employed by 65% of extractive companies. This was followed by environmental issues at 33% and social issues at 22%, with only 10% of companies referencing governance issues.

However, despite the importance of social issues for the sector, and even for a company’s ability to carry out its operations (license to operate and political instability are crucial, especially in the regions where mining and drilling are often carried out), only 22% of the sample considered social factors when setting pay structures.

Climate change metrics such as carbon emissions are a significant concern for oil and gas companies but only three incorporated emissions-related metrics into performance pay.

Utilities disclose fewer metrics, but those that do also include targets

How to integrate ESG issues into executive pay: a review of utilities and extractives