This paper by Carbon Tracker is part of The Inevitable Policy Response (IPR), a pioneering project which aims to prepare financial markets for climate-related policy risks. What is “Inevitable” is some further policy response as the realities of climate change become increasingly apparent. The key questions are when this response will come, what policies will be used, and where the impact will be felt. IPR forecasts a response by 2025 that will be forceful, abrupt, and disorderly because of the delay. It quantifies the impact of this response on the real economy and financial market.

This paper draws on a wide range of sources to discuss trends in international energy production, consumption and trade. It argues that the remarkable fall in renewable electricity costs, combined with the raising of the intermittency ceiling, means that for most countries the opportunities offered by renewable electricity – a cheap, local and independent energy source - are now huge. The incentives for policymakers to speed up the energy transition within the near term are thus rising and significant.

The business case keeps getting stronger. As costs fall, so new cost tipping points will be crossed over the next decade. The cost of new renewables will become cheaper than fossil operating costs during the 2020s, and the cost of dispatchable renewables (with a battery) will fall below the cost of new fossils.

The imperative to act is still there. Renewables provide a way to reach the goals of the Paris Agreement, cut deaths from pollution, and enhance energy independence. They produce more local jobs, increase social justice and are extremely popular.

The harvest is huge. The world can now enjoy a renewable energy windfall – a Gigafall. 6 PWh of renewable energy can be produced before the intermittency ceiling is reached. Ascribe that a value of $10 per MWh and capitalise, and you have a trillion dollar windfall. Start to add in the externality value of renewables and you rapidly get to a much larger number.

The transition will be sequenced. Countries with large domestic coal and gas extraction and electricity generation will face more powerful impediments to change. However, countries with rising demand and pollution issues and those with significant fossil fuel imports will drive the transition.

The forces for change are sufficient to start the transition. A quarter of global coal and gas is imported, and 65% of people live in counties that have rising energy demand and import coal and gas.

The role of policy as enabler. Policymakers can now act to seize the opportunity. That means providing enabling regulatory regimes, taxing the fossil fuel externality, forcing the pace of change, and retraining fossil fuel workers for the new world.

Expect rising policy action. The reward to successful policymakers will be greater wealth, cleaner air, lower warming, energy independence and electoral success. The race is on.

The cost per MWh and the renewable tipping points 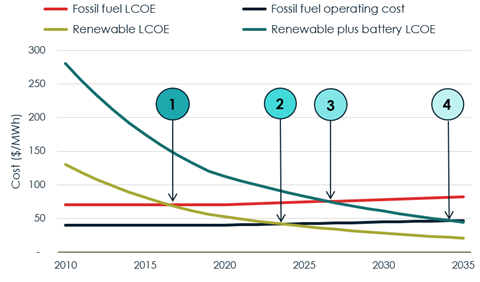