A practical guide to ESG integration for equity investing

The investment process of our VietNam Holding Ltd. (VNH) fund includes an extensive ESG screening (figure 1) and an active engagement programme that is applied to all companies that it invests in. This programme includes regular analyst visits and the personal involvement of a member of the Board of Directors of VNH and the fund’s asset manager, VietNam Holding Asset Management Ltd. (VNHAM). 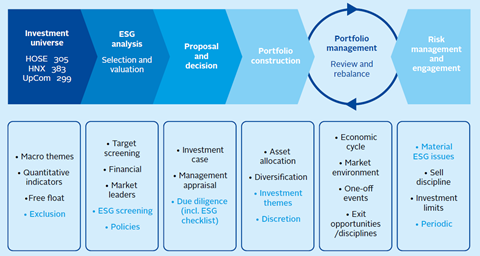 All VNH investee companies are categorised in one of three groups, which are set, and periodically changed, based on financial indicators and fulfillment of strict ESG criteria: Strong Conviction (Group A), Conviction (Group B) or Conviction with Reservation (Group C). Group A companies can have a maximum of 7% of VNH’s NAV invested in them, Group B, 5% and Group C, 3%.

Our Director Engagement Program initially focused on improving an investee company’s financial performance, but in 2010 the programme became equally focused on introducing and emphasising the necessity to systematically implement ESG factors, including the importance and benefits of non-executive Board Members. As a result, the programme has generated a significant increase in visits to investee companies by VNH/VNHAM directors.

The Director Engagement Program relies on a standardised procedure using tried and tested KPIs. The procedures and criteria are outlined in VNHAM’s Operational Manual, and the Program is reviewed quarterly.

The results of the Director Engagement Program, as well as the more frequently implemented Analyst Engagement Program, lead directly to rebalancing portfolios in accordance with the findings. When a company is found to have certain ESG issues, VNHAM will downgrade that company to a lower investment conviction group. Once the ESG issue has been resolved, the company can be returned to the initial conviction group.

Traphaco (TRA) is Vietnam’s leading herbal medicine manufacturer. As a pharmaceutical company that manufactures products from naturally grown ingredients based upon traditional Asian medicine, TRA already had a respectable track record in terms of environmental friendliness. However, it was lacking in other key ESG areas. Most notably, its five-member Board consisted entirely of Directors with executive functions within the company. TRA was initially categorised as a Group B VNH investment, in part due to these shortcomings.

VNH begun engaging TRA on Board Composition in late 2013. In early 2015, VNH endorsed Mrs. Tran Tue Tri as an independent director. Mrs. Tri not only became a nonexecutive member of the Board, but also the only member of the now seven-person Board with no ownership in TRA.

Following significant ESG improvements, VNH has upgraded TRA to the Group A investment category and increased its holding to the maximum permitted limit of 7% of VNH’s NAV at the time of investment. VNH currently has a 10.4% ownership stake in Traphaco.

Dong Phu Rubber (DPR) and Tay Ninh Rubber (TRC), both part of the state-owned Vietnam Rubber Group (VRG), were added to VNH’s portfolio in 2007. Both were among VNH’s first investee companies. Between 2007 and 2013 DPR especially showed strong performance and there was little reason to reconsider the investments.

In March 2013 VNHAM was contacted by the NGO Global Witness and asked if the fund was aware of allegations against the parent company VRG in relation to its activities in Cambodia and Laos, including: corruption, dubious acquisitions of forested areas and farmland, deforestation and bulldozing rice fields to make way for rubber plantations. It became clear that the indigenous people and the environment in the affected areas were being hit very hard by these actions: entire forests were being razed to make way for rubber plantations, and whereas local farmers previously were able to cultivate the (state-owned) rice fields, the rubber companies mainly brought in their own people, depriving the villagers of a source of both food and income. In some cases, there were indications of forced relocation of indigenous people.

VNHAM immediately opened up a line of dialogue with Global Witness and subsequently engaged both investee companies in an attempt to ascertain their point of view on the allegations made by the NGO. Neither company was able to convince VNHAM that the allegations were not true and that they were not involved in any wrong-doing.

Before this issue surfaced, DPR made up 4.7% of VNH’s NAV and TRC 1.2%. In May, 2013, not quite two months after having been contacted by Global Witness, VNHAM began divesting from both companies, and was fully divested by early August 2013.

A practical guide to ESG integration for equity investing