Including human capital in decision making

Svenska Handelsbanken is a Swedish universal bank with nearly 11,700 employees operating in the Nordics and the United Kingdom. It operates in a highly-exposed sector and is subject to a great deal of human capital-related scrutiny.

The company’s long-term focus contributed to their resilience during the 2008 crisis. For example, while competitors were building up massive loan books, Svenska Handelsbanken focused on client and employee attractiveness. As a result, the crisis did not impact the company as severely as its competitors and so it was spared from conducting massive restructuring.

Also, today, in spite of increasing digitalisation, Svenska Handelsbanken considers human interactions to be essential. Branches are therefore relocated rather than shut down.

Svenska Handelsbanken is committed to creating a positive working environment which contributes to a strong corporate culture of trust. For example:

Our Sycomore Happy@Work Fund investment process relies on a thorough analysis of employee engagement as well as the exclusion of companies that carry excessive ESG risks monitored by our SPICE analysis. This assesses the impact of the companies’ relationships with suppliers, society, people, investors, clients and the environment.

As a proxy for evaluating the sustainability of a company’s business model, we look at whether it creates value for all its stakeholders through our SPICE analysis and assign a SPICE rating to each company in our investment universe.

We exclude all the companies with a SPICE rating under three/five from our investment universe, or those which accumulate over 10 controversy points (a controversy is rated from one to three points depending on its severity). The same applies to any company facing a severe (level two out of three) controversy related to working conditions.

The investment process also aims to develop dialogue with companies. We are particularly keen on supporting preventative action in health and safety as this drives company performance and improves employee well-being. 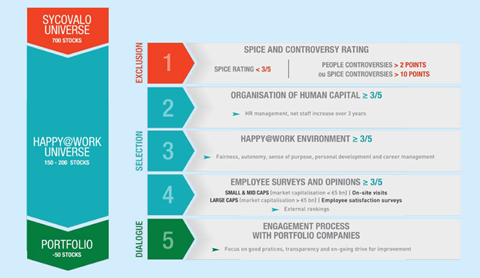 Our SPICE valuation model combines our financial and SPICE analysis and is fully integrated into our valuation tool. In addition to the investment process described above, the construction of the portfolio is dependent on the stocks’ target prices. The SPICE ratings adjust stock’s beta, which in turn changes the stock’s target price.

With an A+ SPICE rating, Svenska Handelsbanken’s beta moved from 1.22 to 0.95. Choosing the standardised valuation method (Gordon-Shapiro approach) – which is the most adapted method to valuate a bank – the target price increased by 17%.