Access to clean water and sanitation is a fundamental right recognised within the UN Sustainable Development Goals. It is the building block upon which our societies and economies are built; it sustains life and communities and is vital to ensuring a sustainable future.

However, over 40% of the global population faces water scarcity concerns, and nearly two and a half billion people lack access to basic sanitation.

Recently, the Senate Foreign Relations Subcommittee on East Asian and Pacific Affairs heard arguments regarding the dire water situation in China, where 90% of the country depends upon polluted groundwater supplies and water quality and shortage issues are common.

The poor quality and availability of water in China creates several potential risks.

The social risks associated with water are harder to quantify but are potentially even more material for investors. Globally, water scarcity has often led to disputes with communities. Because of certain limitations placed on the local media within China, citizens often turn to organised protest to voice water-related concerns. These protests are brought about by the risks that emerge when business activities and water supply issues converge. China’s Environment Ministry acknowledges in its current five-year plan that in recent years, toxic and hazardous chemical pollution has caused many environmental disasters, cutting off drinking water supplies, and even leading to severe health and social problems such as ‘cancer villages’.

Unfortunately, the mispricing of water – both in China and elsewhere around the world – creates a disincentive for the industry to innovate, conserve and recycle, which only perpetuates the problem. For example, China’s crop output is on par with the US’s, but fertilizer and pesticide use levels are more than four times greater per hectare of arable land. The runoff from these agricultural inputs severely impacts water quality and leads to negative social outcomes.

This created an element of uncertainty about the sustainability of its operations. Given the water-related protests seen elsewhere in China, we were concerned disputes with local communities could threaten their ability to operate in some areas. We also questioned whether they would be able to obtain an adequate supply of high quality water for all of their facilities. As a result of these factors, we viewed water stress as a material investment risk for this beverage company. Our concerns around water stress are based on the experience of other beverage manufacturers. In 2014, Coca-Cola was forced to scrap an expansion in Mehadiganj, India, because of conflict with local communities and regulators over access to scarce water resources.5 In 2016, they closed another bottling plant in Kaladera, India for the same reason. To navigate similar constraints in India, SABMiller (AB InBev) incurs incremental expenses to truck water to their breweries from locations where it is more plentiful. Water stress conditions also held up SABMiller’s expansion plans in Zambia, and their existing breweries have had to invest in significant water conservation and recycling initiatives.

Due to this precedent and the much more concentrated nature of the company’s assets, we viewed water stress as a material investment risk for this beverage company. As a result, we applied the highest cost of equity among this group of companies in calculating the beverage manufacturer’s target price. Our 11% cost of equity assumption resulted in a target price that was 7.5% to 15% lower than if we had applied the discount rates used to model the companies in the peer group with less potentially impactful ESG-related risks. The target price for the beverage manufacturer would be approximately 20% higher if it were modeled using the lowest cost of equity that we applied to companies in this peer group (see “Chinese staples: discount rates” below).

After our initial analysis, we engaged with the company to understand their water management programmes and strategies, questioning them on their financial and social impacts. For example, we asked how the company manages community concerns in areas that are impacted by severe water stress. We also sought to understand the kinds of direct capital investments the company has made to ensure a sufficient supply of high-quality water for its operations.

The company’s initial responses were more focused on outlining the local government approvals the company has received in relation to town water rights. Their lack of emphasis on community engagement regarding water scarcity issues suggests the company has not fully evaluated the social risk within their operations; hence, we have maintained our valuation discount on the shares. We have planned additional engagement with the company to more strongly convey our concerns regarding their management of water issues within the communities in which they operate. 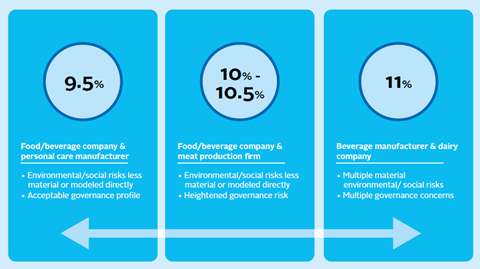