We evaluated a major US retailer whose unique model allows the company to successfully balance shareholder returns and customer value with employee and sustainability responsibility. The retailer operates a membership model whereby customers pay an annual fee in return for big discounts on products. The company stocks fewer product varieties than a typical retailer (around 3,700 items, compared to over 100,000 items at the largest US retailer), and predominantly stocks large pack sizes. As well as increased buying power allowing it to drive down the prices paid to suppliers and charged to consumers, the bulk purchase model benefits the company through:

We like the retailer as an investment due to:

One of the largest costs for retailers is employees, and the US is in an environment of an increasingly tight labour supply and rising minimum wages. In Massachusetts, the minimum wage has risen 38% over three years to US$11 per hour and cities including Los Angeles are moving the minimum wage to US$15 per hour by 2020. State-mandated minimum wage increases across the US are driving the national wage closer to US$9 per hour even as the federal mandate stays unchanged at US$7.25.

As an example of this impact, the largest US retailer announced it will raise its starting minimum wage to US$10 per hour nationally and overall average hourly wages will reach around US$12.50. This will come at a run-rate pretax cost of US$2.7 billion, which has effectively reduced the company’s earnings power 11% (Retailer 2 in figure 3). Another major retailer announced a similar increase in wages and will face an 8% drop in earnings (Retailer 3 in figure 3). 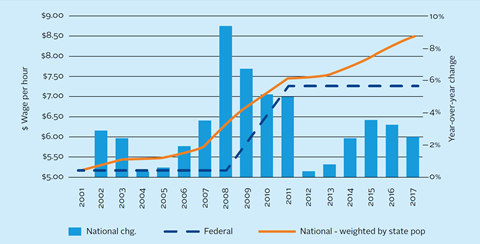 The retailer we evaluated pays significantly more than other retailers due in part to the high revenue generation per employee resulting from its warehouse membership model. The average SG&A expense per employee excluding occupancy and advertising costs (a useful proxy for wages and benefits), shows that this retailer pays its employees on average 27% above its peers.

The company tells us this contributes to low employee turnover, leading to better execution in stores (more efficient stock management/less theft and damage to onsale items/store cleanliness), high revenue productivity and high membership renewal rates. The retailer already paying industry-leading compensation means that wage increases have less impact on profitability: earlier this year, our thesis was proven correct as the retailer announced changes to its pay structure with an EPS impact of just 2% (retailer 1 in figure 3).