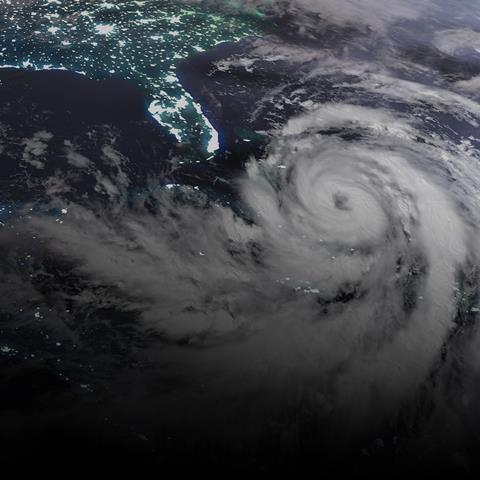 How do hurricane shocks impact local public finance dynamics in the US?

Natural disasters such as Hurricanes Katrina, Harvey, and Sandy have imposed significant costs on US cities. These shocks affect the wellbeing of residents, firms, and municipal governments. For instance, Hurricanes Sandy and Harvey cost taxpayers over US$70 billion and US$130 billion, respectively, according to the National Oceanic and Atmospheric Administration. Climate change is expected to raise these local risks in the future as global greenhouse gas emissions continue to rise. In our recent NBER working paper, Local Public Finance Dynamics and Hurricane Shocks, we study how urban government finances are affected by exposure to hurricanes.

Local governments are essential providers of public goods and services utilised by Americans every day. Sanitation, policing, parks and recreation, public transit, and street maintenance are some of the key services provided at the local level. In 2017, local government expenditures comprised 35% of the combined US$15,541 spent by all levels of government per person on public goods and services (see Figure 1). While there is growing evidence that the impacts of natural disasters extend beyond physical and economic damages (Deryugina, 2017), little is known about how extreme weather events affect local communities through municipal budgets. As local public services, such as transportation and public hospitals, are essential for lower-income households (Glaeser et al., 2008), our study helps us understand how climatic natural disasters impact different levels of society. 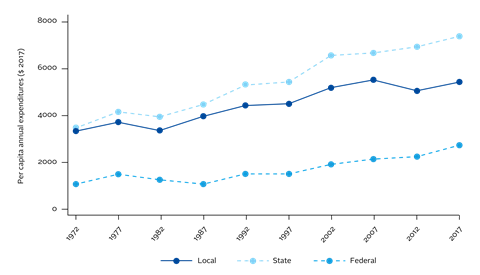 Figure 1. Government expenditure per person on public goods and services

To study the impact of hurricane exposure on local public finances, we build a comprehensive data set that includes information on annual expenditures, revenues, and debt across a range of categories for over 6,000 municipal governments, municipal bond ratings data from Moody’s Analytics, and annual measurements of each municipality’s hurricane exposure, created using the universe of Atlantic Basin hurricanes that made landfall in the United States between 1972 and 2017.

By merging these three data sets, we estimate how a municipality’s budget, tax base, and debt financing evolve in the decade following exposure to hurricanes. Our empirical approach exploits the random timing of hurricanes: because local officials cannot precisely anticipate the timing and location of a hurricane strike within a fiscal year, any changes to municipal finances after a hurricane are a direct result of the event. Similarly, changes made prior to a hurricane strike are not done in anticipation of the event. We compare municipalities within the same state that are demographically and geographically similar but differ in hurricane exposure by chance.

Our analysis yields several findings. First, local governments experience significant declines in revenues, expenditures, and debt in the 10 years after a hurricane strike. These declines are initially offset by intergovernmental transfers in the immediate aftermath of a hurricane but ramp up significantly six to 10 years after. Local revenue sources, including taxes and fees, fall by up to 2% in that period. The effects from major hurricanes are more than double that of the average storm: we find that major hurricanes reduce local revenues by 7.2% in the decade following a hurricane. Local revenue decreases cause subsequent declines in local public goods provision: expenditures on public works including water, sewer, rubbish, and public transit, decline by 3.4% in the six to 10 years after exposure. Major hurricanes cause significantly more service disruption: local public works expenditures decline by 13% after exposure to a hurricane with a maximum wind speed exceeding 96 knots.

Second, we find that debt utilisation declines and debt risk increases after a major hurricane shock. Specifically, we find that total debt falls by 19.2% - 25.9% in the 10 years following a major hurricane. Unlike tax-based revenue sources, the availability of debt declines immediately after hurricane exposure, and persists up to a decade thereafter. Part of the decline in municipal debt is caused by ratings agency responses. On average, Moody’s Analytics – one of the three largest ratings agencies in the world – downgrades bond ratings in the aftermath of a hurricane. These downgrades translate into a 17% increase in the risk of default, relative to the sample standard deviation in each of 10 years after a hurricane strike.

Impacts on minority and lower-income communities

Third, we find that local governments with large minority, low income, or high school-dropout populations face the largest revenue and expenditure cut-backs following hurricanes (see Figure 2). For instance, our estimated magnitudes imply that a one standard deviation increase in the share of the non-white population (measured as of 1970) exacerbates local tax revenue declines by an additional 1.3% in the decade after a hurricane, or over twice as large as the decline experienced by a municipality with average non-white population. Intergovernmental transfers to local governments offset some of the initial fiscal impacts of hurricanes, but do not, on average, alleviate long-term declines in local government funding sources. 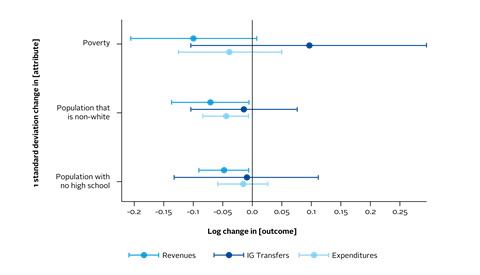 Our paper provides the first evidence that natural disasters can create a vicious cycle for local governments by increasing their cost of debt, depleting the tax base, and inhibiting their ability to make large capital investments. Climate-induced natural disasters can discourage local governments from investing in precisely the hazard mitigation technologies or reconstruction projects required to deflect future damages from hurricane shocks. These findings are relevant for considering the future risks of climate change, as we show that fiscal costs are disproportionately borne by minority and lower-income communities.