Private debt has only recently been considered an asset class in its own right, and the term covers a range of different investment styles and strategies. The term ‘private debt’ is typically applied to debt investments which are not financed by banks and are not issued or traded in an open market, while the word ‘private’ refers to the investment instrument itself and not necessarily the borrower – i.e., public companies can borrow via private debt just as private companies can. Private debt falls into a broader category termed ‘alternative debt’ or ‘alternative credit’, and is used interchangeably with ‘direct lending’, ‘private lending’ and ‘private credit’.

Within the private debt market, investors lend to investee entities – be they corporate groups, subsidiaries or special purpose vehicles established to finance specific projects or assets – in the same way that banks lend to such entities. Private debt investments are typically used to finance business growth, provide working capital, or fund infrastructure or real estate development. 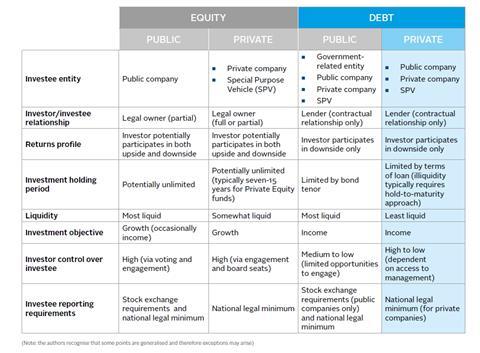 State of the private debt market

The global market has grown considerably as a result of both supply and demand factors.

Figure 3: relationship between bank and non-bank lending for leveraged loans from 1994 to 2012

The total volume of institutional assets under management allocated to private debt is estimated to be around US$638bn globally. There are two dominant private debt markets globally, in the US and Europe. The US market is larger and more mature than that of the EU (which is predominantly comprised of UK and French issuers).

Roughly US$107bn of new capital was raised by private debt funds in 2017 globally, of which US$67bn was raised by funds in the US, US$33bn by funds in Europe, and USD$6bn by funds in Asia5. Elsewhere – particularly Germany and the Nordics – banks still dominate the lending market for historic and/or regulatory reasons.

Figure 4: growth in private capital assets under management by asset class from 2007 to 2017

The most active investors in the private debt market are pension funds, foundations, endowments and insurance companies (see Figure 5). The sectors which are likely to attract the largest allocations from investors in the next 12-24 months (based on Q4 2017) are real assets such as infrastructure and commercial real estate, followed by private equity-sponsored companies (see Figure 6). 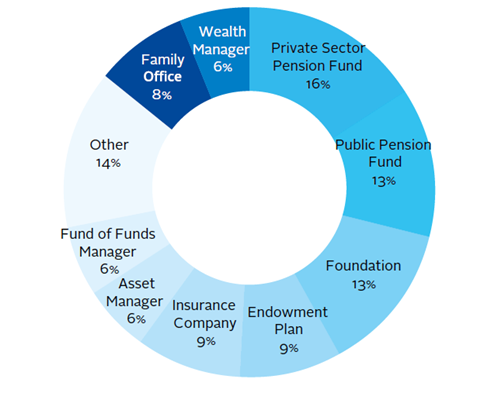