3
Climate risk: the unhedgeable half
Research

Climate risk: the unhedgeable half

A Cambridge Institute for Sustainability Leadership (CISL) report shows that up to half of the losses from shifting market sentiment to climate change can be offset through asset allocation, but that the remaining half is unhedgeable at the investor level, leaving investors exposed unless system-wide action is taken.

The report also demonstrates that for the global economy overall, action to limit global warming to below 2o C will, despite a short-term negative impact, lead to higher long-term growth than if no action is taken.

The model: scenarios and shocks

Within each scenario, the impact of various “sentiment shocks” was modelled, caused by triggers such as disruptive technology, significant new climate-related policy, asset stranding and extreme weather events. The shocks were introduced into the model at Q1 2016, and their impact was mapped progressively over five years, along with the cumulative macroeconomic long-term impact at 2050. The magnitude of the most severe confidence shock is approximately half the size of the shock that led to the 2008 financial crisis. 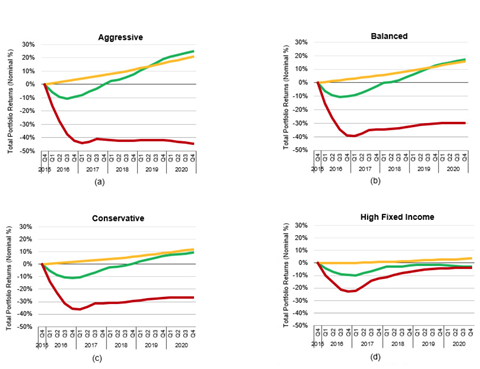 The Aggressive portfolio performs worst of all the portfolios in the No Mitigation scenario, losing around 45% within the first year and never recovering. Under the Two Degrees scenario, however, the portfolio again suffers the largest initial loss, but recoups its losses by the end of year two and overtakes the Baseline scenario in year four.

The authors then analysed sectors in developed and emerging markets to examine the hedging potential of cross-industry diversification and investment in sectors with low climate risk. Under the No Mitigation scenario, 47% of the negative impacts of climate change across industry can be hedged through industrial diversification and investment in industries that exhibit few climate-related risks. Similarly, shifting from an aggressive equity portfolio to one with a higher percentage of fixed-income assets makes it possible to hedge 49% of the risk associated with equities. The effects of each strategy are not cumulative, however, and no individual strategy offsets more than half the risk.