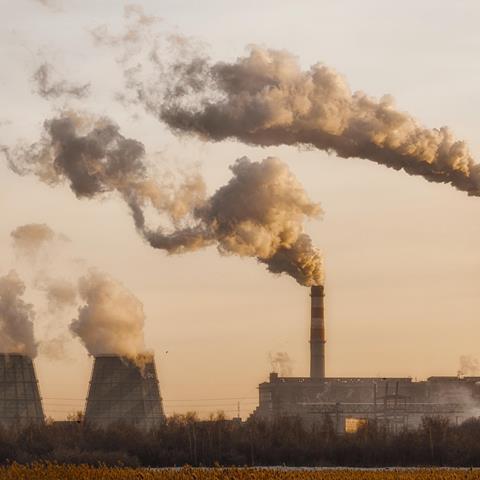 Since former Bank of England governor Mark Carney’s landmark speech in 2015, central banks and financial regulators have increasingly recognised the potential impacts of climate risk, and of a disorderly transition to a low-carbon economy (usually referred to as climate transition risk), on individual and systemic financial stability.

In this regard, a group of central banks and financial regulators created the Network for Greening the Financial System (NGFS), aiming to support investors’ climate-related financial risk disclosures and highlighting the importance of running climate stress-tests (NGSF 2019).

While these recent concerns come from the community of financial supervisors, they are aligned with a stream of academic research that has developed since 2017 around a seminal work on financial system climate stress-testing (Battiston et al. 2017).

This has created a conceptual and analytical framework through which to test those concerns, by quantitatively assessing forward-looking climate risks in individual investors’ portfolios. The framework embeds future climate and economic trajectories, developed by the Integrated Assessment Models (IAM) (Kriegler et al. 2013) and reviewed in the Intergovernmental Panel on Climate Change (IPCC) reports, in traditional financial risk metrics and methods used by academics and practitioners, such as the Value at Risk (VaR) and stress-testing.

These exposures amount to more than 40% for the equity portfolios of pension funds and investment funds (Figure one).

Figure one: Equity holdings’ exposures to climate-policy-relevant sectors of selected investment funds worldwide (top 15 by size of equity portfolio in the data)

By introducing Climate VAR when considering micro-level climate transition risks, such as the exposures of financial institutions to individual financial contracts, they find that banks with a “brown” strategy incur large losses (Figure two). 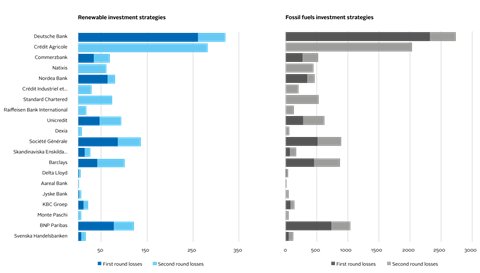 These could be amplified by financial interconnectedness, with implications on asset price volatility and financial stability (Monasterolo et al. 2017).

The methodology has now been incorporated into the CLIMAFIN tool to price climate-related financial risks under deep uncertainty (Battiston et al. 2019a).

Climate change risk is forward-looking and characterised by deep uncertainty and tail events (Weitzman 2009), tipping points (Solomon et al. 2009, Lenton et al. 2019) and non-linearity (Ackerman 2017), leading to potential domino effects (Steffen et al. 2018). Most important, climate risk is endogenous, because the realisation of climate scenarios depends on policy-making decisions and investors’ decisions (e.g. on portfolio decarbonisation), based on their beliefs (Battiston and Monasterolo 2019). This confronts us with the need to consider multiple scenarios and equilibria with unknown probabilities, i.e. a condition for decision-making under uncertainty.

In contrast, the macroeconomic and macro-econometric models used for stress-testing by central banks are characterised by market clearing prices, linear shock transmissions, representative and intertemporal optimising agents, and an aggregate representation of the technologies that are relevant for the transition, e.g. energy. In addition, standard financial risk valuation relies on average values, historical market information and backward-looking benchmarks (Battiston and Monasterolo 2019).

Using the right models is crucial to correctly informing risk management strategies and prudential regulations, and to avoid underestimating or miscalculating risks that could trigger financial instability. This also helps us to understand how finance can be a driver or a barrier to achieving climate targets.

From theory to practice: a five-step approach to climate stress-testing

In CLIMAFIN’s Climate Stress-Test, we consider shocks caused by a disorderly transition from a business-as-usual scenario (BAU) to a scenario characterised by the introduction of a climate policy, such as a carbon tax (P) that allows us to achieve the Paris Agreement 2°C target. From this we developed a five-step approach (Battiston et al. 2017):

1. Identify the financial contracts that are exposed to climate transition risks based on the issuer’s sector as well at the technological profile of their business lines (e.g. for utility companies the share of electricity from fossil versus renewable sources).

2. Identify a set of Climate Policy Shock Scenarios based on energy transition scenarios (e.g. provided by the IPCC (2018), by the NGFS (2019) and Bolton et al. (2020)). Develop a consolidated database of economic scenarios (derived from IAM and other established climate economic models) to derive estimates of shocks in sector-wide economic output (e.g. low-carbon versus carbon-intensive) and countries. Shocks are computed as a relative difference in sectors’ output between the two trajectories (BAU and P). The disorderly transition can be understood as a temporary out-of-equilibrium economic shift (i.e. a jump) between two separate equilibrium trajectories.

3. Compute the adjustment on the Probability of Default (PD) conditioned to the Climate Policy Shock on firms and individual financial contracts (e.g. equity holdings, corporate and sovereign bonds, loans). Compute the climate spread for individual sovereign and corporate bonds, i.e. the adjustment in the bond spread conditional to a given Climate Policy Shock Scenario.

4. Compute the adjustment on key financial risk metrics for gains and losses at the level of investors’ portfolios e.g. the Climate VaR, which represents the worst-case loss, for a chosen confidence level, conditional to a Climate Policy Shock Scenario.

5. By applying financial network models that account for risk reverberation driven by financial interconnectedness (Battiston et al. 2012, Roncoroni et al. 2019), run a climate stress-test to assess the potential losses for the financial sector and the implications on systemic financial risk.

This framework reconciles the deep uncertainty of climate transition risk and its interplay with financial risk into the existing stress-test exercises used by financial supervisors.

The climate stress-test approach proposed here has been further developed and applied to several policy exercises in collaboration with central banks and financial regulators:

The climate stress-test presented here allows future climate risks to be incorporated in the assessment of firms’ or countries’ financial solvency. As such, it can inform investors’ risk management strategies and financial regulators’ policies to allow for a smooth transition and preserve financial stability. However, the complexity and novelty of the analysis requires the relevant climate shock scenarios and financial risk metrics and methods to be identified by financial supervisors together with the scientific community, to ensure the exercise is credible and relevant.

Battiston S. and Monasterolo I. (2019). A climate risk assessment of sovereign bond portfolios. Working paper in collaboration with OeNB, available at SSRN: https://papers.ssrn.com/sol3/papers.cfm?abstract_id=3376218

Battiston, S., Mandel, A. and Monasterolo, I. (2019a). CLIMAFIN Handbook: Pricing Forward-Looking Climate Risks Under Uncertainty. Available at SSRN: 3476586.

Carney, M. (2015). Breaking the Tragedy of the Horizon: climate change and financial stability. Speech given at Lloyd’s of London by the Governor of the Bank of England, 29.

Intergovernmental Panel on Climate Change (IPCC) (2018). Global warming of 1.5 C. An IPCC Special Report on the impacts of global warming.

Network for Greening the Financial System (2019). A call for action Climate change as a source of financial risk. First comprehensive report.

Weitzman, M. L. (2009). On Modeling and interpreting the economics of catastrophic climate change. The Review of Economics and Statistics, XCI (1).