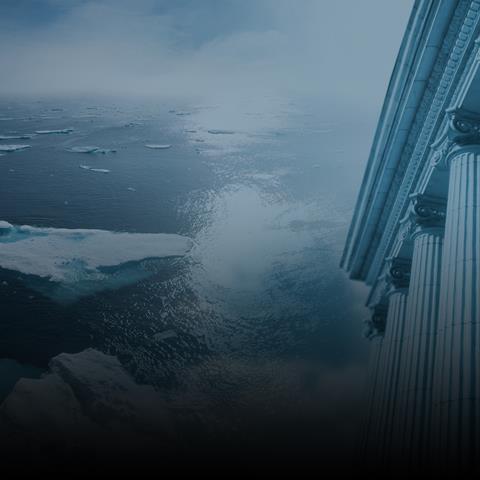 Does climate change drive up the cost of government borrowing?

Regulatory bodies, rating agencies and financial analysts have warned that climate change and associated extreme weather events can threaten the sovereign creditworthiness of countries. Indeed, some nations have faced legal charges for not disclosing climate risks in their sovereign bond disclosures. But can rising temperatures and associated weather events really drive up the borrowing costs of governments, or even push countries into default? Which countries would be affected, and how could they develop resilience towards these threats?

In a recent paper, I show that, for vulnerable emerging market economies, rising temperatures are indeed linked to significantly lower sovereign creditworthiness. I construct a simple proxy for the degree of global heating that countries have experienced so far, as Figure 1 illustrates. It depicts the mean annual temperature of 54 emerging market economies, from 1901 to 2018, showing an upward trend in global temperatures since the second half of the 20th century. From 1994 onward, I calculate the countries’ temperature deviation from their 1901-1950 average. With a mean of 0.84°C, this deviation is close to the 1°C global heating trend that the IPCC (2018) has estimated since pre-industrial levels. 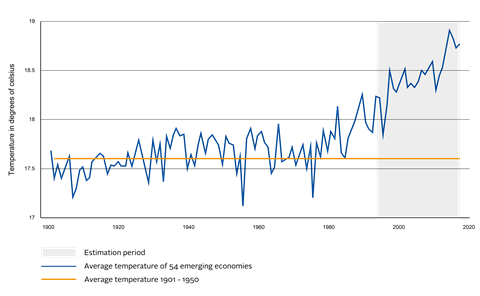 Climate-related natural disasters, infectious diseases and other threats to natural and human livelihoods are projected to increase dramatically with further warming, while the warming trends seen so far have already led to more extreme weather events that can cause significant economic damage (IPCC 2018).

To establish more formal evidence and to link climate trends specifically to sovereign creditworthiness, I analyse monthly data for the 54 emerging economies from 1994 to 2018. I regress the market returns of the Emerging Market Bond Index (EMBI), a common measure for sovereign debt performance, on the described temperature anomaly fluctuations, controlling for precipitation and including country and region-time fixed effects on the month-year level. The captured temperature shocks are thus idiosyncratic and account for weather trends common to each region.

My results show that warm countries are significantly more susceptible to temperature shocks than cold or mild-tempered countries. Figure 2 depicts this relationship. For very warm countries – those in the highest quintile of average annual temperature – a temperature increase has a negative and statistically significant effect on sovereign creditworthiness (i.e. lower EMBI returns). 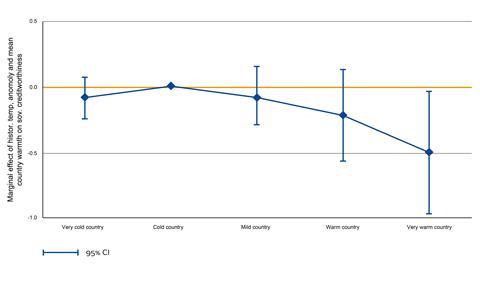 While such future projections must be treated carefully, this magnitude is considerable and could lead to rising sovereign borrowing costs, or even defaults, for warmer countries in the next decades.

How can countries strengthen their resilience towards climate-induced sovereign credit risk?

These results suggest that higher climate-related institutional quality could improve the resilience and adaptiveness of emerging economies towards climate change. This can be the case, for instance, if droughts or floods lead to physical damages that require swift government intervention, or if distributional consequences of temperature-induced costs and losses need to be managed efficiently.

My evidence suggests that historical temperature deviations, approximating physical climate change, can significantly lower the sovereign bond performance of those emerging economies that are already warmer on average. Investors and regulators should monitor these risks carefully because, if past trends are any guidance, affected countries could face meaningful increases in their sovereign debt costs as climate change intensifies. In addition to lowering global CO2 emissions, strengthening institutions could provide resilience towards rising temperatures.

IPCC. 2018. Global Warming of 1.5°C. An IPCC Special Report on the impacts of global warming of 1.5°C above pre-industrial levels and related global greenhouse gas emission pathways, in the context of strengthening the global response to the threat of climate change, sustainable development, and efforts to eradicate poverty (Summary for Policymakers).