On June 12, PRI published a blog post from Mark DesJardine and Rodolphe Durand that criticized activism as a shift towards short‐term value creation at the expense of long‐term interests for shareholders and stakeholders alike. In their post, DesJardine and Durand reference Elliott’s investment in Hess Corporation as a prime example supporting their contention.

In fact, and directly contrary to the authors’ claims, Hess is a good example of the long‐term benefits that shareholder activism can confer on a company, its shareholders and it stakeholders. The truth is that Elliott’s investment in Hess is one of the best examples the authors could have found to demonstrate the benefits that equity activism can achieve: As a result of Elliott’s long‐term involvement, Hess’s performance inflected from perennial laggard to one of the industry’s topperforming companies.

The assertions made by DesJardine and Durand regarding Elliott’s investment in Hess are sloppy at best and intentionally misleading at worst. To start, the authors chose January 29, 2013 as a start date for calculating Hess’s returns post‐Elliott becoming a shareholder – one day after Elliott’s involvement was disclosed to the market. In so doing, the authors have either inadvertently or deliberately left out the 9% gain in the stock that resulted from this disclosure. Such gains are common when successful activists disclose a new position, as markets “price in” the expectation of sustainable positive change. Had the authors calculated Hess’s share‐price change using the appropriate starting date (January 28, 2013), they would have concluded that Hess’s share price is actually up by 3.1% over their chosen time horizon (rather than down 5.4%, as they asserted in their blog post).

The authors also failed to take dividends into account; with dividends factored in, Hess’s Total Shareholder Return (TSR), which is the more appropriate metric for gauging share‐price performance, was 15.5% during the period between January 28, 2013 and February 21, 2020.

Perhaps more importantly, the authors chose to conceal from PRI readers the relative performance of Hess versus the broader energy industry. They cite a February 21, 2020 end date for their calculations – an implicit acknowledgement that it would be unfair to contemplate shareholder returns that are affected by broader “sea change” events such as the COVID‐19 pandemic. Nevertheless, and inconsistently, the authors fail to acknowledge the energy market crash that occurred between Autumn 2014 and February 2016, during which period oil prices fell by more than 75%, from more than $100 to below $26 per barrel. Given that Hess is an oil company and sells oil, it would be hard to dispute that this decline represented a material event for the company that had nothing to do with shareholder activism – and yet the authors chose to ignore it altogether.

More damning to the authors’ assertions is that despite these structural headwinds in the oil industry, Hess significantly outperformed its industry peers over the time period in question. From January 28, 2013 through February 21, 2020, the SPDR Oil & Gas Exploration and Production ETF (XOP) experienced a 67.2% price loss, and a negative 64.6% total shareholder return. This means that Hess’s share price outperformed its peer indexby more than 70% on an absolute basis, and more than 80% on a total return basis (i.e., including dividends). Put more simply, $100 invested in Hess on January 28, 2013 would be worth more than $115 on February 21, 2020, versus $100 in the broader E&P index would be worth $35. Not only did the company generate a positive absolute return, it has drastically outperformed most of the other companies that it competes against.

Thus, even setting aside the impact of Elliott’s activism on Hess’s share price, DesJardine and Durand have simply given PRI Blog readers an inaccurate picture of how Hess’s share price performed during the time period with which they claim to be concerned. 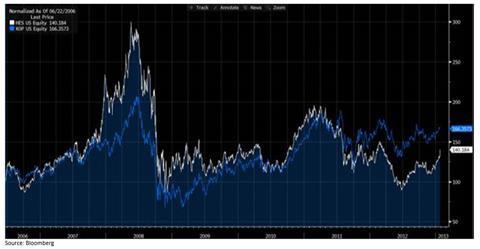 Indexed chart of Hess Performance vs. XOP Index from 1/28/2013 to 2/21/2020
Hess share performance has consistently beaten the industry benchmark since Elliott’s involvement, and had outperformed by over 70% by February 21, 2020 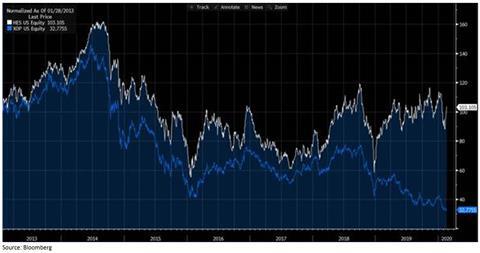 DesJardine and Durand’s Finding #2 points to shortfalls in long‐term ESG‐focused initiatives. Once again, Hess provides contrary rather than supporting evidence. Hess has been and continues to be a leader in ESG, regularly placing at the top of market and industry rankings on ESG metrics, and is consistently rated among MSCI’s USA ESG Leaders. Hess is ranked #1 in the entire S&P based on Bloomberg ESG Disclosure Scores.

It should also be noted that, unlike the assertion made in the article, Elliott was actually quite focused on improving corporate governance at Hess (the “G” in “ESG”). Prior to Elliott’s involvement, Hess’s board lacked industry experience and independence. As a result of our involvement in 2013, the board separated its CEO and Chairman roles and added three new independent directors with relevant experience, significantly strengthening the board and bringing Hess into compliance with commonly accepted best practices in the governance sphere. 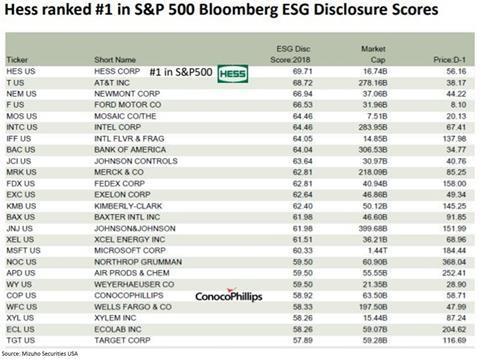 Finding #3 in DesJardine and Durand’s post suggests that managers may curtail spending and divest business units as a result of activist pressure, and that Hess divested business units and sold other assets in response to Elliott’s campaign. The authors portray business divestiture as inherently bad for stakeholders and long‐term shareholders, regardless of the merits of doing so. This portrayal is profoundly misguided, and once again, the example of Hess undermines the authors’ assertions rather than supporting them.

As a result of Elliott’s involvement, Hess sold a number of business units for approximately $12 billion in value prior to the aforementioned oil‐market collapse of 2014, when the oil market fell by more than 75%. These assets, if retained, would have likewise seen heavy value impairment and resulted in billions of losses for shareholders. Instead, these sale proceeds helped Hess de‐lever its balance sheet meaningfully, better positioning the company to withstand the forthcoming downturn.

As Hess stands today, the most common bearish argument advanced by skeptics of the company is that Hess trades at too high a multiple of current earnings, particularly given its outperformance over the last couple of years (Hess shares were up 65% in 2019, the 4th best performer out of more than 70 companies in the XOP Index). These skeptics believe that the investment community is too optimistic about the company’s future prospects. Earlier this month, JPMorgan hosted a “Hess Week Deep Dive” in which its analysts upgraded the company to an “Overweight” recommendation, calling it the “Lion of the Long Cycle” and recommending that investors focus on the company’s “unique long‐term cash flow growth” and “diversified model poised to give shareholders what they want over the long‐term.” This analysis certainly doesn’t sound like a description of a company that has maximized short‐term interest at the expense of long‐term benefit.

Finally, while the authors imply that Elliott reaped short‐term gains and left a weakened company in the wake of its involvement, it hasn’t been years since Elliott exited its position in Hess — it has been barely six months. Elliott was a top shareholder of Hess for more than seven years before exiting its position in late 2019, more than five years after the authors’ mention of an August 2014 peak and almost seven years since Elliott pushed for so‐called “short‐term” value creation.

It is beyond the scope of this response to address whatever similar methodological shortcomings may afflict the authors’ broader analysis of shareholder activism, which they referenced in their post. However, if the easily detectable weaknesses and omissions that characterize their analysis of Elliott’s investment in Hess are any indication, we would recommend that any PRI Blog readers or PRI signatories take a close and skeptical look at any findings advanced by these authors regarding the benefits of shareholder activism. A number of studies have found that, contrary to the authors’ assertions, activist investors have a positive impact on companies in both the short and long term, both in terms of shareholder returns and in terms of innovation efficiency, and we believe the example of Hess actually serves to support this thesis.

During Elliott’s investment period, Hess outperformed its peers significantly, and today, the company is seen among the best‐positioned companies in its industry going forward. Over recent months, as investors were looking for safer energy investment opportunities that had attractive long‐term prospects in the wake of the COVID‐19 pandemic, Hess regularly appeared within “most recommended” lists among the equity research community. We believe the strategic actions undertaken by management – many of which were consistent with the recommendations of Elliott – have helped transform Hess into the favorably‐positioned company it is today. While the work of the authors leaves much to be desired, and may be driven more by biases than facts, we do want to thank the authors for allowing us the opportunity we might otherwise not have had to set forth the benefits that our longterm activism brought to Hess as a company and its shareholders.