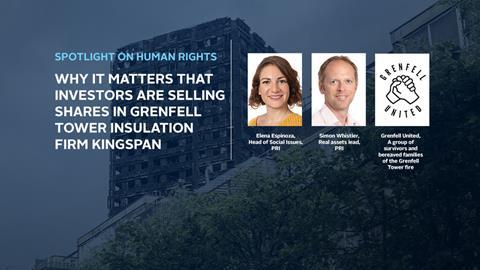 Spotlight on human rights: the Grenfell Tower tragedy…what can investors do?

In the third episode of the PRI’s human rights podcast series, the PRI’s Elena Espinoza speaks to two members of Grenfell United, a group of survivors and bereaved families of the Grenfell Tower fire, and Simon Whistler, real assets lead at the PRI.

The Grenfell Tower fire occurred early in the morning of Wednesday 14 June 2017 in North Kensington, London. It spread quickly through the tower block’s 24 stories, taking the lives of 72 people and injuring many more.

After the disaster, it emerged that the cladding that was put on the tower during its refurbishment fuelled the fire.

As a result of mounting pressure from bereaved families, investors have been selling shares in Grenfell Tower cladding firm Kingspan.

In this episode, Grenfell United speak about the ways in which they raised concerns before the fire and how they have engaged with investors who are tied to companies linked with the tragedy.

The PRI’s Simon Whistler then reflects on Grenfell United’s testimony, outlining how investors can strengthen their due diligence processes and describing the lessons that investors internationally can learn.

Be sure to subscribe and never miss an episode