Why and how to engage on corporate tax responsibility

A good indicator of potential earnings risk is the difference between the effective tax rate on a company’s income statement and the weighted average of statutory rates based on the firm’s geographic sales mix8. Although the mismatch may be explained by factors unrelated to tax minimisation, such as tax credits, large and persistent tax gaps are generally the result of profit-shifting and aggressive tax planning.

The foreign effective tax rate can be calculated using foreign profit data and current and deferred foreign tax data, which are both found in the tax footnote. Applicable primarily for companies based in a jurisdiction with a worldwide taxation system (e.g. the US), this rate can be then compared to the average statutory rate of the countries where the company does business, and a significant gap may call for further dialogue. 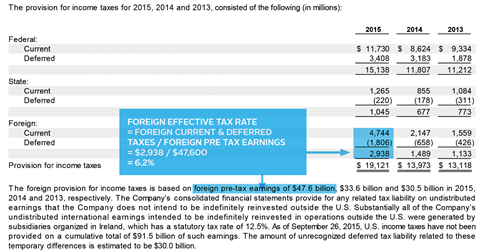 MNEs can choose to deem some deferred foreign profit as likely to be repatriated in an effort to cause their global tax rate to more closely resemble peers’ or typical statutory rates, even though the company may not intend to actually repatriate the foreign cash. This decision will make the tax gap red flag outlined above appear acceptable, when the company may actually be highly aggressive in its tax planning.

In April 2013 Apple broke several records in one month. It sold bonds worth US$17bn – the largest debt sale in history – and used the funds to increase dividends and orchestrate the biggest ever share buyback scheme, worth US$60bn, in the process regaining its position as the most valuable company in the world. But if it had US$145bn in cash and maintained a large deferred tax liability related to foreign profits that it expects to repatriate, why did it feel the need to raise debt?

The answer lies in the US cash repatriation rules. To bring that money back into the country would mean an estimated US$35bn tax bill, so borrowing was the cheaper option. This financial engineering was incentivised because although servicing the new bonds costs Apple about US$300m a year in interest payments, it got a tax break worth about US$100m a year for issuing the debt.

Apple executives told the Levin Senate subcommittee in 2013 that recording a deferred tax liability “provides no indication” that they intend to repatriate foreign profits, which suggests the decision to book its large deferred tax liability may simply be window dressing. The success of this mega bond issuance coupled with a global environment of continuing low interest rates, means such practices are likely to continue for US companies with large cash piles abroad.

Also known as uncertain tax positions, UTBs display the tax positions being taken by a company that management believes are less than 50% likely to be upheld by a tax authority. A large balance compared to peers (which can be calculated by dividing each company’s UTBs by its enterprise value), or a growing balance, suggests a company that has recently adopted higher risk tax strategies has faced a change of position from relevant revenue authorities.

New disclosures or changes in language used in tax footnotes

Although disclosure in tax footnotes is generally minimal, some companies provide information regarding recent changes to their tax strategies that may not have been reviewed by tax authorities and hence may increase earnings risk in future.

Particularly when combined with any of the above red flags, poor disclosure of geographic revenues may hinder the ability of an analyst to assess the tax gap.

Although these do not necessarily signify any wrongdoing, they are valuable in determining specific tax strategies used by a company – especially if there are repeated mentions – and are highly indicative of reputational risk. The company’s response to any allegations may also be a good proxy for the board’s risk tolerance related to tax practices.

Disclosure of how the company perceives and addresses tax-related risks, including information on overarching policies and governance of the issue, is critical. While many companies still do not provide any meaningful narrative or disclosure beyond numbers in their annual reporting, examples of good practices in this regard have emerged. Leading MNEs should be expected to follow this model.

Unilever’s Global Tax principles ”illustrate good corporate practice in the area of tax management and tax transparency, balancing the interests of our various stakeholders”. The principles, for which internal training is provided, cover the following areas:

The company explicitly states that ”secrecy jurisdictions or so-called ‘tax havens’ are not used for tax avoidance”, while under the last point, the company makes reference to its commitment to annual reporting to the board on adherence to the tax principles.

A company having multiple subsidiaries in tax havens may also constitute a red flag, although there is no globally accepted definition or list of tax havens, inclusion in some lists has been heavily contested by some countries and full disclosure of subsidiaries is often lacking (many US companies have dramatically reduced the number of disclosed subsidiaries over the past few years). Investors, however, can make use of information provided by regional and national regulators, or organisations such as The Tax Justice Network (Financial Secrecy Index).

When prioritising which companies to engage with and preparing to engage them, investors should also take into account sector-specific, region-specific and companyspecific factors:

We select companies in three stages:

Why and how to engage on corporate tax responsibility