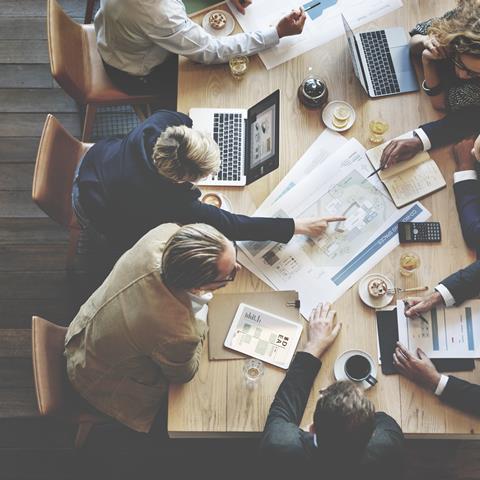 Can State-Owned Enterprises play a role in global environmental engagement?

Policy makers have dedicated significant attention to companies’ exposure to climate change and other environmental issues. But the traditional tools and green industrial policies available to governments, such as imposing carbon taxes or providing research subsidies to develop green technology, are “strong in theory, ambiguous in practice”, according to renowned Harvard economist Dani Rodrik.

In our research, we examine whether the state can use its more visible hand, through stakes in public corporations, to implement its environmental policies and we find that modern State-Owned Enterprises (SOEs) may have emerged to play an important role in dealing with environmental externalities.

There has been a global re-emergence of state-owned enterprises (SOEs), particularly due to the ascension of China and other emerging economies. While developed nations have been the largest contributors to global warming, the growth rate in new emissions is concentrated in emerging economies, where SOEs are more influential, as shown in Figure 1.

SOEs also constitute some of the largest companies globally. PetroChina, Gazprom and Petrobras feature prominently in the Forbes ranking of top global public companies, while Saudi Aramco is a recent addition – and the world’s most valuable company. In China, companies in which the state is a majority shareholder account for about two-thirds of local stock market capitalisation. Other emerging market governments, such as those of India, Russia and Brazil, also hold majority or significant minority stakes in publicly listed companies. There are still some SOEs from developed economies (such as EDF Group and GDF Suez in France or ENI in Italy) but in many Western economies large-scale privatisations in the 1980s and 1990s led to the state’s role in business declining, as illustrated in Figure 2. 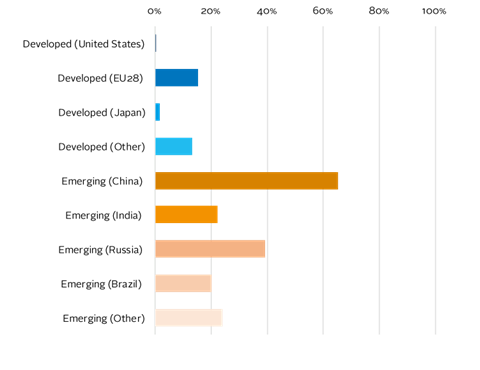 We argue that SOEs, even those that are publicly listed, are not established solely for profit-maximisation but could be positioned to use capital to deal with environmental externalities. Environmental protection initiatives usually require substantial investment and long-term resource commitment, which private firms often cannot afford. State-owned firms, though, can coordinate resources through government procurement and state funding to support such green investment. This is not without critics, however. The Economist calls the resurging state-owned mega-enterprises “Leviathan Inc.”, especially those in emerging economies, and warns about the danger of such a state capitalism model. Leviathan, something very large and powerful, or a sea monster in scriptural accounts, often refers to the political state after its use by Thomas Hobbes. There is a large literature on the economic inefficiency of state ownership which argues that SOE managers are chosen for political reasons, have low-powered incentives, and are poorly monitored by boards packed with politicians. Political elites controlling SOEs may seek rents from society at the expense of other stakeholders, which can reduce economic efficiency through corruption, poor resource allocation, less innovation and skewed wealth creation.

We take these ideas to the data and study the impact of state ownership on a firm’s engagement with environmental issues. We compile a comprehensive dataset on SOEs and combine it with measures of environmental, social, and governance (ESG) performance of publicly listed firms in 44 countries over the 2004 to 2014 period. SOEs are more prevalent in certain industries: telecommunications, utilities, and oil and gas and there is considerable cross-country variation in state ownership, with emerging markets (25% of publicly listed companies) more prominent than developed economies (4%). As shown in Figure 2, SOEs represent more than 60% of China’s stock market, close to 40% in Russia and about 20% in Brazil. In comparison, government stakes are insignificant in the US and smaller in other major developed economies. We focus primarily on how state ownership is related to corporate environmental sustainability, as it measures how a firm addresses market failures and externalities to the natural ecosystem generated by its operation. We use data from various sources, including Thomson Reuters’ ASSET4 environmental scores, the MSCI ESG Intangible Value Assessment, and Sustainalytics ESG Ratings.

Our main findings are that SOEs engage more in environmental issues, such as emission mitigation, innovation in eco-efficient products or services, reduction in natural resources usage, and produce less CO2 emissions as measured by actual firm-level emission data, than non-SOEs. For example, a comparison of ASSET4 environmental scores shows that SOEs, on average, have better performance (Figure 3) and these results hold in multivariate regressions where we control for more factors. Using long lags, we find that historically state-owned firms still perform better in environmental issues, suggesting that state ownership promotes environmental engagement, rather than governments picking and keeping green companies and divesting polluting firms as political expedient. 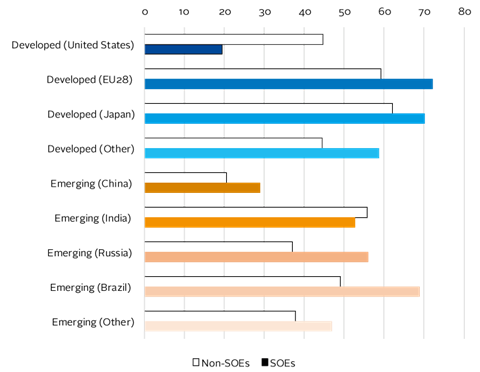 We also explore the time-series variation in environmental engagement by SOEs around significant world shocks, the awareness of climate change and other environmental problems. We analyse the reaction of firms to the March 2011 Fukushima nuclear disaster in Japan (the most significant nuclear incident since Chernobyl). We find that SOEs, especially in the utility industry and in countries with more nuclear power provisions, improved their environmental engagement subsequent to the disaster. We explore the effect of people’s attention to climate change by Google Search volume and find that state-owned firms, especially in high-polluting industries, cut more CO2 emissions when there is increased attention on abnormal temperatures. These results are unique to the affected industries. Moreover, we examine the variation in the role of state ownership induced by a change in a government’s political orientation. We find that SOEs become more environmentally engaged following a left-leaning change in a government. These tests collectively are strong evidence supporting that firms’ state ownership causally affects environmental engagement by SOEs.

We further find that the relationship is more pronounced for firms in countries facing greater energy risks and for those in conflict with neighbouring states that have stronger incentives to preserve and develop alternative energy sources. Moreover, it is stronger among firms in countries with weaker environmental regulation and equity market development. Furthermore, we find that the positive effect of state ownership on environmental engagement is concentrated in pollution-intensive industries but is weaker in firms with more foreign activities (such as foreign sales and assets). These results are consistent with the view that governments help local economies when the institutional environment is weak and when the challenges of pollution and emissions are more pressing.

To better understand why government stakes are special, we test but fail to find a similar effect on other types of block-owners on environmental engagement. This suggests that what state block-ownership captures is not simply a mechanical effect of concentrated ownership but can be attributed to the state as the ultimate owner. The effect is stronger in the case of direct-ownership stakes by domestic state entities. We don’t find an effect in the case of stakes held by foreign governments or by sovereign wealth funds (SWFs). This is not unexpected, as SWFs are more concerned with financial returns, while direct stakes by domestic governments are more focused in addressing market failures, especially regarding environmental issues, than foreign governments.

We also show that SOEs’ environmental engagement does not necessarily come at the expense of shareholder value in terms of future market-to-book ratio and profitability. One possible explanation for this is that these companies may receive government subsidies, earn government procurements, or have more financial support from governments or state-owned banks. We document that SOEs also engage more in social issues, but do not have better or worse corporate governance practices, indicating that governments indeed play a different role from other block-holders.

Our findings have important implications: as economies worldwide have embraced pro-market reforms in the last quarter of the twentieth century, typical SOEs were transformed. Partial privatisation may have resulted in changes, but did not spell the end of state ownership.

Hobbes, Thomas (1651), Leviathan or The Matter, Forme and Power of a Common Wealth Ecclesiastical and Civil