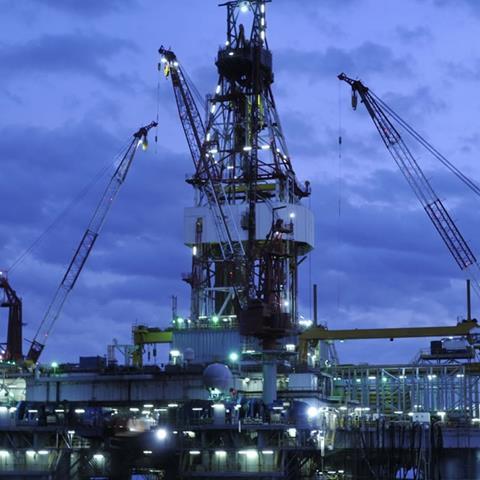 This new analysis provides a way of understanding whether the supply options of the largest publicly traded oil and gas producers are aligned with demand levels consistent with a 2 degree Celsius (2D) carbon budget. By allocating the carbon budget to potential oil and gas projects, through applying the economic logic of a carbon supply cost curve, it is possible to identify which companies have the highest exposure to potential capital expenditure (capex) to 2025. This report provides a snapshot of the potentially unneeded capex spend for 69 global oil and gas companies – highlighting for the first time, the wide-ranging degree of exposure amongst companies in the sector.

The analysis shows that: 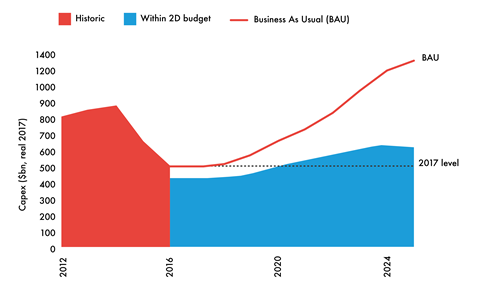 Capital expenditure has dropped in recent years as a response to the lower oil price. In order to align with a 2D scenario, the level of capital deployment should not rebound from 2016 levels across the industry as a whole. Under a business as usual scenario, with rising prices, investment ramps up again. This would create financial exposure to projects not consistent with peaking emissions in the near future.

This analysis utilises the oil and gas demand levels indicated by the International Energy Agency’s (IEA) World Energy Outlook 2016 450 scenario as a proxy for a 2D scenario. For the period 2017-2035, this equates to a total carbon budget for oil and gas of 320Gt of CO2, split 59% for oil and 41% for gas. This is at the higher end of the range of carbon budgets that could be applied, as it only provides a 50% probability of a 2D outcome. If one were to try and align with limiting global warming to below 2D, or apply a higher likelihood of the outcome then this would provide an even tighter constraint on future oil and gas supply and demand.

Identifying the potential winners and losers

This analysis focuses on the metric: “percentage of potential capex outside 2D budget”. This can effectively give investors a sense of what proportion of the company’s investment plans may fail to deliver an acceptable return in the scenario of a world limited to 2°C global warming outcome (i.e. which project capex is within budget and which is “unneeded”). This can be interpreted in different ways according to investment strategies and policies. In terms of risk management, some investors may prefer a degree of optionality – but the higher the level of unneeded capex, the more growth strategies would have to be tempered. For investors seeking to align with a 2D scenario, it is clear that some companies are better positioned than others.

This analysis provides a snapshot of the industry at the start of 2017 using relative project economics to determine which projects are included in different scenarios. There has been significant movement in terms of both the overall cost curve, and the relative positions in the 18 months since the last Carbon Tracker review of the global oil and gas sector. This reflects overall downward pressure on costs in response to the oil price, as well as shifts by certain regions. The changing dynamics between OPEC producers and the US shale industry have provided a novel backdrop to this picture. Increased standardisation and efficiency of US shale operations have seen major cost declines, and resource expectations have been upgraded. The fall in oil price has also hit some hydrocarbon exporting nations hard, affecting foreign exchanges rates. This demonstrates why it is important for companies to provide regular information on how their strategy is adapting to the changing context, as well as aligning with a 2D scenario.

Around two thirds of the potential oil and gas production which is surplus to requirements in a 2D scenario is controlled by the private sector, demonstrating how the risk is skewed towards listed companies rather than national oil companies. The significance of the large companies and the products they produce is also evident from the analysis. The carbon budget that the production of an oil major will use up to 2035 is equivalent to the recommended carbon budget for the whole of the UK for a similar period.

Oil and gas companies have options in terms of which new projects they plan to develop in the future. At present there is little transparency of these strategies, making it difficult for investors to understand and test the degree of alignment with a 2D scenario. Companies may have already decided to put a number of high cost projects on hold, but more can be done to tell this story to their shareholders.

The energy transition is upon us, and across the financial system from pension funds to regulators, increasing scrutiny of the alignment of carbon intensive companies with a low carbon future is evident. The May 2017 shareholder resolution at ExxonMobil calling for management to produce a report detailing the implications of a 2D scenario for the company received 62% support. This, along with similar results at other oil and gas companies’ AGMs, signals that the majority of investors in the world’s biggest fossil fuel producers see value in having this information.

The Financial Stability Board’s (FSB) TCFD recommendations recognise the value of 2D scenario analyses, and particularly highlight disclosure of 2D reference scenario tests as one of the key ways to improve and help standardise company reporting around future climate risks. While such tests are increasingly common amongst larger oil and gas companies, this research also proves that it is possible even for small organisations to produce an analysis of relative positioning under a 2D reference scenario. With a number of investment institutions and companies already committed to following the final recommendations, the impetus for those left to follow suit is clear.