9
Lessons from the automotive sector
Credit risk and ratings

Lessons from the automotive sector

The PRI’s forum on ESG in credit ratings that took place in Frankfurt focused on the automotive sector.

The Frankfurt roundtable focused on the automotive sector for three main reasons:

Car lifecycle assessment (i.e. the procedure that measures the impact of a vehicle on the environment from production to use, disposal and eventual recycling) is now a standard practice among major car manufacturers, most of which have adopted the International Organization of Standards (ISO) Life Cycle Assessment guidelines. Combined with lifecycle costing, this means that many car manufacturers are familiar with using a sustainability management tool that allows the comparison of a product against itself (at different points in its life) and against its competitors. This practice alone already facilitates credit risk analysis when it comes to ESG consideration.

Furthermore, the automotive sector is relatively more exposed than others to disruptive forces and changes in business models linked to the introduction of advanced vehicles, autonomous and shared driving as well as regulatory changes. This implies that credit analysts have important ESG questions to assess when considering management policies and measuring balance sheet strength in the face of new opportunities, costs, competitive challenges and risks that car manufacturers need to address.

The big unknowns are not only related to future product offerings and their quality but to changes in client preferences, increased digitalisation and connectivity, as well as uncertainties related to the regulatory environment. A side effect of these changes is the varying mix of labour input in car production versus that of fixed capital, with ramifications on jobs, changing skillset requirements and costs related to workforce restructuring.

During the roundtable, we heard how ESG factors feature in the credit risk analysis of car manufacturers. Broadly speaking and bearing in mind that methodologies differ, when formulating a credit opinion, a credit rating agency assesses the business risk profile of car manufacturer and its financial profile:

The figure below illustrates how ESG factors are not isolated risks and feature in different components of business risk – and often repeatedly as they can be assessed under all ESG categories. Governance is listed first as it was cited by all credit practitioners as the most decisive factor in triggering rating or outlook changes. 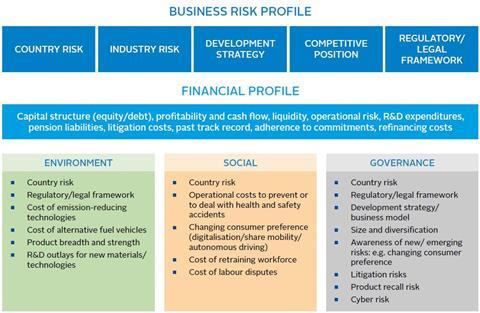 S&P Global Ratings’ rating assigned to Volkswagen (VW) came under pressure in the aftermath of the diesel emission manipulation in the US. A violation of environmental laws eventually revealed shortfalls in governance. S&P Global Ratings announced a CreditWatch with negative implications on VW’s “A” rating in September 2015 following the recall of 11 million vehicles worldwide. After admitting involvement in the manipulation of diesel engine exhaust emissions, the rating was downgraded twice by two notches (in October and December 2015 respectively) while the assessment of governance was revised downwards to reflect inadequate risk management frameworks of environmental and social risks. Equally important is the recent revision of the outlook from negative to stable on better-than-expected operating performance and improving cash flow generation, although the rating remains well below its pre-September 2015 level due to ongoing concerns about governance. It took a long time for VW stocks and bonds to return to levels close to the time prior to the diesel emission scandal.

We also heard about how Moody’s Investors Service integrated carbon transition risks in its assessment of General Motors (GM) and how the company’s rating returned to investment-grade last year. This was partly because of GM’s prudent investment in emerging technologies and its proactive approach to allocating managerial, financial and technical resources necessary to comply with increasingly stringent carbon emissions.

Another good example is the recent Moody’s Investors Service’s downgrading of Tesla21 to B3 from B2 with a change in the outlook from stable to negative on concerns about the “significant shortfall” in the production rate of its Model 3. Even if Tesla produces environmentally-friendly vehicles (putting aside concerns about how the electricity grid is supplied and the disposal of batteries), its financial situation is tight, as the company needs to raise capital to repay maturing bonds and deliver on its target (which are important from a credit perspective).

To reach its target of five million NEVs on the roads by 2020 – as part of its clean energy strategy – China has offered substantial fiscal subsidies since 2009, at both the national and sub-national level. However, the terms of these subsidies have changed repeatedly over time, partly in response to concerns about subsidy fraud and inconsistent product quality (including safety features). For example, the 2016 introduction of a “30 mileage threshold” for subsidising non-family used NEVs dented the profits of selected bus makers.

The latest adjustment for the 2017-2020 period targets manufacturers rather than end-users. Among other features, it tightens vehicle qualification requirements (for example, an electric car must meet minimum energy efficiency and maximum speed requirements to qualify for the subsidy and not just maximum speed as was the case in 2016). Meanwhile, as of April 2018, automakers and importers will be evaluated against a dual scoring system which takes into account the output of NEVs and the fuel consumption of traditional cars. These changes are credit positive for those manufacturers that are quickly changing their development strategy (BYD is making progress in the building permit approval by the Qinghai provincial government for a 30,000-tonne battery-grade lithium carbonate project). Car manufacturers that are not adapting production lines quickly enough to thrive in the new regulatory environment are credit negative.