In part one, we highlighted the importance of credit ratings in sovereign debt, with the government debt market by far the largest across FI instruments (p. 20).

Also, since the global financial crisis, the share of government bonds with AAA ratings by the largest three CRAs has been shrinking, in a sign that even assets once perceived as safe havens are not immune from credit risk.

The work that the PRI started in this asset class as part of the ESG in Credit Ratings Initiative began with a panel session at PRI in Person 2017 in Berlin, which featured investor and CRA representatives as well as a representative of the sovereign state of France. It continued with the London and Paris roundtables, covering sovereign as well as corporate credit risk. The discussions during these events started highlighting the areas around which to frame analysis for how to consider ESG factors more systematically, particularly the differences between:

Forum participants noted that one of the main aspects that differentiates sovereign credit risk analysis from corporate credit risk is that more standardised ESG-related data are available for the former, particularly from national accounts. Thus, comparability is relatively easier than for corporate bonds, even bearing in mind that the data are often released with a significant lag compared to their reference period and may be lacking in quality (some countries more so than others).

On the other hand, engagement with sovereign issuers is perceived to be more difficult, either because there are fewer direct channels or because it is more challenging to identify the official or department accountable. Sensitivity-related implications may also be a factor. However, in the same way that the roundtable discussions helped to clarify that considering ESG factors in credit risk analysis does not necessarily involve exclusion or rules-based investment strategies, it became clear that sovereign engagement does not involve political interference; rather, it can be necessary for fact-finding (which CRAs already do as part of their surveillance). Thus, in addition to meeting government officials, engagement could include meeting other stakeholders and members of society (such as representatives of opposition parties, trade unions, employers’ associations, technocrats or the press, as well as supranational entities such as the IMF or the OECD which conduct regular country reviews). This can help to form a holistic view of the sovereign landscape.

Government roadshows organised by debt management offices to launch bond issues such as green bonds are also a useful setting for dialogue. Admittedly, sovereign engagement can be more challenging for investors in emerging markets, but, even here, collaborative platforms such as the Emerging Markets Investors Alliance can offer a channel to advocate sound governance.

Finally, modifying asset allocation based on ESG criteria can be challenging if investors are benchmarking standard sovereign bond indices. As individual country weights are higher than those for single corporates, exclusion can be problematic because of the absence of adequate substitutes, as well as underweighting or overweighting. Furthermore, ESG sovereign bond benchmarks are limited at this stage.

Although many analysts tend to use sovereign credit ratings as proxies for country risk, they are a different type of risk. Sovereign credit ratings measure the relative likelihood of a sovereign defaulting on its debt obligations i.e. its ability and willingness to honour its debt; country risk is more linked to the risk of investing or lending in a country, including political risk, exchange rate risk, economic risk and transfer risk. And while it is true that sovereigns with a high credit rating tend to have low country risk, this is not necessarily a corollary. Thus, there can be instances where corporate entities have a higher credit rating than the sovereign rating of the country in which they operate, particularly if they do not largely depend on the domestic market.

Similarly to corporate credit risk, governance remains by far the most important of the three ESG categories when assessing sovereign risk, as it is directly linked to a government’s ability and willingness to generate enough revenues to repay its financial obligations. In turn, these depend on a government’s institutional and political standing as well as its economic fabric (growth potential, diversification and competitiveness) which determines the strength of its revenue base. This conclusion was also supported by a recent S&P Global Ratings study, showing that governance factors impacted sovereign and international public finance credit more often than social and environmental factors over the two years ending July 2018 (see below).

Note: the chart shows the number of cases in which ESG factors directly influenced the ratings of 147 sovereigns, local and regional governments, insurers and banks in the two years to 31 July 2018.

However, some forum participants also observed that unlike corporate credit, when assessing sovereign credit risk, the importance of social factors is easier to understand and measure (with links to demographics, education levels, labour market structure, health and inequality or corruption indicators, which are generally available and easy to score on a relative basis). So, in theory, they are easier to incorporate in a systematic credit risk framework.

Environmental factors, meanwhile, are captured the least, with participants acknowledging that natural capital is often considered as exogenous and no price is used to measure it, let alone associated with the way it is managed or depleted. The same applies to environmental policies.

Some environmental elements may be factored into GDP analysis and a country’s balance of payment, such as if a country’s energy supply heavily depends on imports, or a country with heightened CO2 emissions because it manufactures many export goods. However, they need to be made more explicit so that markets can begin to price a country’s vulnerability or resilience (see below). Moreover, the relative weight of environmental factors on how they impact credit risk may increase substantially going forward, as the impact of climate change continues to intensify, if measures to tackle its causes are not taken. 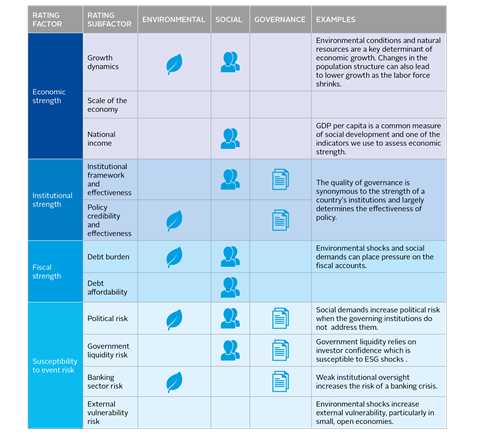 Example of how ESG factors can feature in a sovereign rating methodology.

With that said, the interdependency of ESG factors is very clear in the case of sovereign credit risk: ultimately, whether a country has sufficient preventative or mitigation procedures in place to withstand physical environmental risks, or whether it implements policies to address climate-related challenges, is a governance issue, similar to other policy choices (such as those related to immigration, education or healthcare).

In part one (p. 21), we provided examples of several CRA frameworks, highlighting which ESG factors are already part of the pillars of the methodology to assess sovereign credit risk. We also pointed out that research, especially on the credit impact of environmental issues, was increasing. CRAs have since made further progress in clarifying how ESG factors feature in their methodologies.

They have also started publishing thematic research specifically on this topic, as well as analysis on sub-sovereign, regional and local governments. The list on the CRAs’ websites is extensive.

During the London and Paris roundtables, investors also learned about a new actor on the CRA landscape: Beyond Ratings (BR), which integrates ESG factors explicitly into its financial ratings, in addition to economic and financial indicators (see below).

Example of a methodological approach to sovereign risk assessment with more explicit reference to sustainability indicators.