Water is one of the few resources that is needed for almost all transformation processes that foster production activities.

It is required for the growth and production of raw materials, the manufacturing of raw goods into consumable products, and the distribution of products to the market. However, the world’s fresh water supply is increasingly facing challenges of scarcity and contamination, and the situation is rapidly deteriorating. As a key input to most business sectors, this has led to significant economic disruptions in the recent past, including power station shut downs and agricultural commodity price volatility. As the greatest portion of water withdrawals globally are attributable to the agricultural sector, the effects of scarcity will largely manifest within this domain and in those sectors dependent on it.

While the planet’s water supply may appear to be voluminous and renewable, the oceans contain about 97.5% of all water. Furthermore, of the earth’s total freshwater, over 68% is locked up in ice and glaciers and an additional 30% exists as groundwater. Although the world’s hydrological cycle shifts supply in a constant dynamic exchange, and in spite of extraction and filtration technologies to access and alter this supply, less than 1% of the world’s water reserves are both suitable for and accessible to humans.

In recent years, water demand has outpaced population growth two-fold, and is set to grow rapidly with increasing economic development, a growing middle class and further urbanisation. With the current growth rate in water consumption and no further efficiency gains, it is estimated that global demand for water will grow from 4.5 trillion m3 today to 6.9 trillion m3 by 2030. This business-as-usual scenario means demand which is 40% above the currently accessible and reliable water supply.

Given its importance for life on earth and to sustainable socio-economic development, the importance of water to human well-being cannot be overstated. However, globally, an estimated 884 million people are without access to safe drinking water, despite this being seen as a basic human right. It is also estimated that over 40% of the global population will be living in areas of severe water stress through 2050. 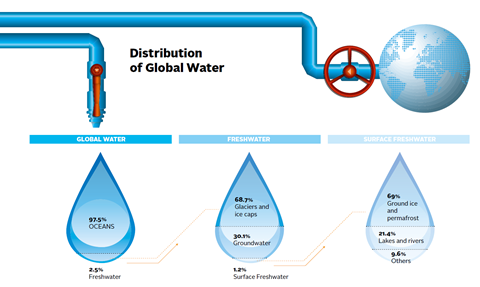 Supported by clear evidence of diminishing groundwater supplies, an estimated 20% of the earth’s aquifers are currently being over-exploited, further contributing to scarcity conditions.Additionally, wetland deterioration globally is limiting ecosystem capacity to purify water within the global hydrological cycle.

Human water use continues to be the primary cause of aquifer depletion in many parts of the world, with 70% of all anthropogenic water consumption globally attributable to agriculture. Although rainfed agriculture is the predominant global agricultural production system, its current productivity is only about half of the potential achievable, provided optimal (often irrigated), agricultural management systems are in place. Due to water scarcity and declines in quality, this shift is often not possible.

Impacts of climate change exacerbate the existing waterrelated risks to global systems. For example, in addition to shifts in precipitation patterns, the likely increase in frequency and/or intensity of extreme weather events such as droughts and floods, disrupts well-established physical systems built upon prevailing water availability conditions. As climate change intensifies, the threats posed by water scarcity are expected to increase, while water scarcity conditions may further exacerbate the effects of a changing climate.Alongside this, water quality is in decline in many regions globally due to agricultural runoff, industrial pollution, poor water management practices and poor governance of water basins.

Agricultural commodities such as cotton, wheat and sugar are used as raw material inputs in a wide variety of products in the food, beverage, retail and apparel sectors. Supply chains for these products can be notoriously complex, with multiple tiers and a variety of intermediaries across a range of sizes all playing a role and contributing to uncertainties around who is sourcing what from where. For example, a typical food product would pass through a complex, multi-tiered supply chain before it reaches the point of sale, and many food products will have several processes for each agricultural commodity used to produce the final product. Furthermore, many manufacturers do not have clear visibility of their supply chains, including where they are sourcing from and what parties are involved at different steps. This lack of transparency and awareness was demonstrated by the recent European horsemeat scandal in early 2013 and separately, in the Rana Plaza garment factory tragedy in Bangladesh in April 2013. In both cases, many large manufacturers were unaware of their exposure to the risks within their global supply chains.

Alongside the inherent complexities and lack of transparency in global supply chains, further challenges arise due to differences in sourcing structures between companies and for different products produced by the same company. While some companies may have direct ownership of farms (vertical integration) or direct contracts with farms where crops are grown, others source from commodities traders and on global commodity markets. This means that one loaf of bread at a supermarket may include wheat purchased at global market prices from an international agricultural trader, while another may consist of wheat from an individual farm or group of farms which is fully traceable at each stage of production.

Such differences lead to a wide spectrum of visibility into, and influence over, the supply chain; the more vertically integrated the greater the visibility and influence, although this may result in increased costs and the loss of benefits from specialisation in operations. All of the above factors combine to create a complex and opaque global agricultural supply web, making measurement and management of the environmental and social impacts of food, beverage and apparel production difficult. This is especially true of water risks in the supply of agricultural commodities, with the bulk of many products’ water footprint found in lower levels of the supply chain (i.e. in the growing of the raw material inputs rather than in the manufacturing, distribution, consumption, etc.).

Business case of risk and management

Water risks faced by suppliers of agricultural commodities and those companies reliant on them can be broadly divided into operational, reputational and regulatory aspects.

Risks to operations can result from decreased water availability or quality, increased water costs or water treatment costs, and disruptions due to conflicts with other large-scale water users, such as communities, municipalities, and other companies. In these cases, impacts on the operations of primary water users – the growers – can work up the value chain, primarily in the form of increased prices for raw inputs. Looking forward, a 2012 report commissioned by the United Nations estimated that in the coming decades, yields of the three biggest crops according to caloric production – maize, wheat, and rice – would be significantly reduced in developing nations as a result of climate change. Similar climate and geopolitical impacts discussed above are likely to have operational impacts around the world. Examining the world’s water supply, the various pressures exerted on it, and the repercussions of past water shortages, it becomes clear that operational risk to water supply within agricultural supply chains can have significant material impacts on end users.

Conflict with local communities can also trigger reputation risks, particularly if the company is seen as competing with the population for access to limited water resources. Such risks may be faced by companies up and down agricultural supply chains. For instance, in recent months Indian officials closed a major beverage maker’s bottling factory in India following community protests centred on its high water use. While this example is a direct impact on a company’s operations, it highlights the potential for such risks to also be felt up the supply chain. For example, water scarcity in areas of coffee production could lead to conflict between local food crops and the coffee crops grown for multi-national food and beverage companies. Such a conflict could have reputational impacts further up the supply chain if NGOs or consumers assign blame to the company ultimately purchasing the supply chain.

Regulatory impacts, including caps and restrictions, are also a factor. Such risks have started to materialise in countries particularly vulnerable to water stress. For example, China has already implemented water use caps, resulting in a significant increase of operational risk to its top five utilities. Similarly, in the US, water withdrawal allowances in the Susquehanna basin in Pennsylvania and in New York were temporarily suspended in April 2012 due to stream-flow levels dropping well below normal.While those companies with withdrawals suspended were largely energy companies, there is no guarantee that agricultural commodity growers will not face similar restrictions going forward. Additionally, regulatory risks may materialise in other ways, such as through increased pricing as regulators seek to incorporate externality costs into water charges.

The risks above are particularly relevant to the agricultural supply chains of companies who manufacture food, beverage and apparel products, the traders who supply them and the retailers selling the end products. Disruptions in supply, conflicts with local communities or new water restrictions could all flow through the supply chain and lead to higher input prices, more volatile prices, declining quality, and lack of availability of raw materials. Conversely, improved and active management of water risks offers companies potential for cost savings, operational benefits, pre-emption of regulatory risk, and enhanced community relations, all of which can contribute to competitive advantage.Manufacturing companies at the end of the supply chain can benefit from the actions taken by their suppliers in the same way, and additionally through greater security and transparency in their production inputs.