Investment products such as green bonds are seen by many as a way of addressing ESG risks such as climate change and water scarcity.

Themed bonds or ABS are mostly issued by corporates, banks, and supranationals, such as the World Bank, but they are also issued by national agencies and local authorities or municipals. Proceeds are most commonly allocated to renewable energy projects, such as wind farms, or cleaner forms of public transport. ABS may be securitised against solar power installations. Depending on how themed bonds are classified, the outstanding debt in this market totals between US$36 billion (labelled green bonds) and US$502 billion (‘climate themed’ bonds market).20 Of the larger estimate, US$358 billion has been designated to finance carbon-efficient transport, while US$75 billion has been allocated to renewable energy development. In 2013 the majority of these bonds by volume were issued by corporate nonfinancial issuers, closely followed by supranationals. 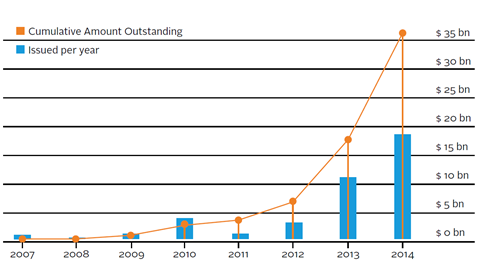 “A green bond doesn’t change the risk of a portfolio because you’re still buying the same credits…from a financial standpoint, it’s the same risk.”

Project bond funds are allocated to specific projects, such as the construction of wind power stations or offshore transmission. (For example, in 2013, Brookfield Renewable, a Canadian renewable energy producer, issued a BBB-rated CA$450 million, 17-year bond to finance a 166MW wind farm.) Themed revenue bonds are typically issued by states, municipalities or government agencies to finance income-generating projects such as public transport systems.

Use-of-proceeds or asset-linked bonds are labelled as green by issuers. Rather than allocating proceeds to a discrete project, funds are ring-fenced for future investments that qualify as green (as defined by the issuer). For example:

Securitised green bond payments are backed income from loans or leases on green asset portfolios or pools such as solar panel installations. (For example, in 2014, Toyota Financial Services, the leasing company of the Japanese carmaker, issued A/A- US$1.75 billion ABS, maturing in three tranches from six to eight years, to finance loans and leases for Toyota’s hybrid range of cars.)

Climate-themed bonds come under the broader definition of bonds issued to raise capital for climate change solutions, such as low-carbon transport systems and revenue from energy efficient products.

There are a number of themes other than climate change that may be linked specifically to bond proceeds. Social housing finance is one of the most well established, although issuance has still been relatively small to date. The International Finance Facility for Immunisation has been issuing bonds to raise finance for vaccinations since 2006. Other potential allocations of funds include education facilities, health care and other projects that are either public sector or public–private partnerships.

The need for green bond standards

The themed bond market needs to adopt standards in order to protect the interests of investors and ensure continued growth of the market. Few investors agree on definitions of ‘green’, and, invariably, investors will need to decide on what shades of green they want to invest in. In addition, few if any issuers will comprehensively audit the additionality or impact of their green investments. In 2013–2014, 39 percent of green bond issues lacked independent reviews to validate their use of proceeds.

Issuing banks, with guidance from issuers, investors and environmental groups, developed the Green Bond Principles (GBP) to provide voluntary guidelines on the issuance of green bonds. The GBP support the certification of green bonds against “fully developed and vetted” standards but do not currently propose a single global standard.

Sponsored by KfW and Union Investment