After consulting with signatories and acknowledging the critical importance of the nominations process to longterm investor returns, the PRI coordinated a collaborative engagement on the issue.

Between November 2014 and June 2016, 17 investors with a collective US$2.3bn in AUM commenced dialogue with 24 companies in the US and France.

Looking at trends across the full 136 companies in the research dataset, ISS highlights:

In the US, changes in shareholders’ voting policies over the past two years with respect to board refreshment led to more engagement with directors on the topic and some meaningful changes seen in both boardroom appointments and disclosure practices.

However, while directors at many US companies are clearly motivated to signal these enhanced efforts to the marketplace, some critical boardroom processes — for example, on director evaluation – remain largely hidden from shareholder view. Despite vocal encouragement from many investors and also from market regulators, US boards have also failed to make significant progress in boosting gender diversity.

In France, changes in company law and codes of market best practices were the primary drivers of change. CAC40 firms are among those that have most women on boards in the world, as companies worked to meet a deadline to meet a 40 percent quota for women on boards by 1 January 2017.

All CAC40 companies now align with local bestpractice codes with respect to a maximum four-year term for directors’ mandates. In line with AFEP-Medef Code7 recommendations, a majority of the study companies now hold “executive sessions” of their boards at least once per year, in which the non-executive directors meet without the executives present to review executive performance. While combining the CEO and chair titles remains common in France, more boards (including now all large-cap banks) have moved to separate these roles. French boards also made strides over the past four years to provide more details about their boardroom and top executive succession processes.

All companies demonstrated awareness of investors’ concerns by responding to a request for dialogue. Nineteen companies acknowledged the importance of the issue under discussion through calls or meetings or by providing written responses to the questions raised. 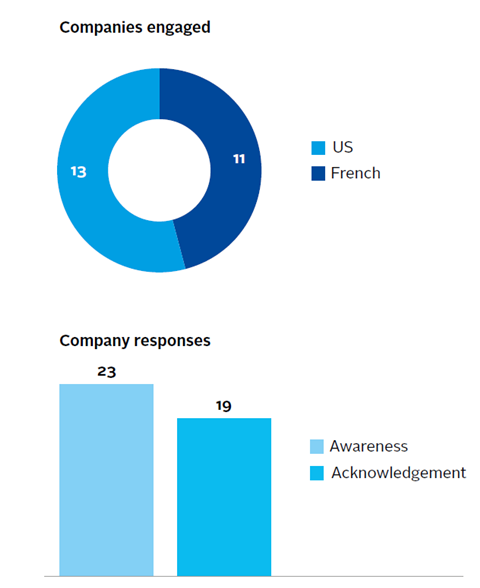 Aggregate results from the engagement demonstrate that market forces and peer pressure, aided by engagement, are working to drive better standards of corporate governance in relation to the nominations process.

Engagement meetings were mostly held with the company secretary in the US and investor relations in France, closely followed by company secretaries. While the group did speak with one company CEO during the course of the engagement, not having meetings with board members of many companies was one of the perceived limitations of this engagement effort, as directors are able to offer unique insight on board nominations – for example, on board skill gaps, succession planning and results of board performance reviews. Access to the board, or at least investor perception that there is a representation of shareholder views in board discussion, remains an area for improvement in dialogue between companies and investors on this issue.

Greater disclosure from companies on their nominations process can assist investors in assessing the quality of corporate governance structures in place. More detail on what the investor group learned about market practices in the US and France respectively is shared on the following pages.