As with the US, investors chose to engage with 11 French companies ranked in the lower 50% of all CAC40 company performance based on their nominations process.

After engagement, four of these companies had moved out of the lower 50%.

They were most commonly asked:

Although the role of the LID continues to evolve, investors generally consider it a position that promises balance of power on the board, and may serve as a crucial conduit for shareholders’ views.

Looking at 2014 proxy disclosures, seven French companies engaged by the PRI group did not appear to have appointed an LID (this was in line with common market practice – only 14% of companies that had a combined chair/CEO have appointed an LID in that year). Then during engagement dialogue, only two of those seven companies decided to newly appoint an LID. These appointments were welcomed by the investors. However, the companies were not able to say whether the independent director would be available to engage with shareholders on governance matters. In fact, data shows that LIDs may convene board meetings and/ or input to the meeting agenda, but there is scant mention of their role engaging or acting as a crucial conduit of investors’ views to the board.

While the other five companies were open to discuss independence and appoint an LID, they generally responded with several different reasons as to why this was not deemed best for the company. Feedback collected by investors in the group indicate that there does not appear to be any prevailing rationale behind not appointing an LID by these companies.

Companies said “We are not seeking to appoint an LID because…”

Investors are encouraged to ask companies about the presence of an LID where CEO and chair roles are combined, and may choose to challenge companies to further explain their rationale beyond any responses received similar to the above. This could happen in particular when the company performs poorly compared to other market standards.

Even where an LID has been appointed, investors may also want to ask more about what the board understands their role to be in relation to offering the shareholders’ perspective in the boardroom.

More generally, French companies in the CAC40 universe moved away from allocating executive functions to the chair. While this was a common practice in 2014, it was no longer the case in 2016. There was also a small increase in the number of companies that designated LIDs. However, 63% of the CAC40 companies continued to have a chair who was also a CEO. 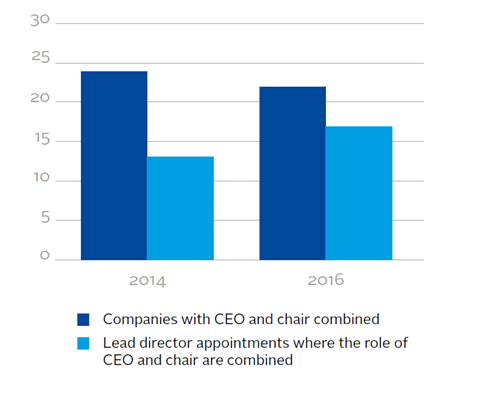 Investors in this market should still question companies on the rationale behind the dual roles for the chair and evaluate the merit of any arguments put forward.

Five companies engaged by the PRI group disclose that they reviewed the composition of their boards within the last fiscal year, making comparisons with composition at the beginning of the dialogue. This appears in line with broader market data. In 2016 77% of companies, compared to 61% in 2014, disclosed they review board composition on at least an annual basis. This shows that during engagement, a trend has emerged of annual board composition reviews becoming the market norm, to be reasonably expected by investors. 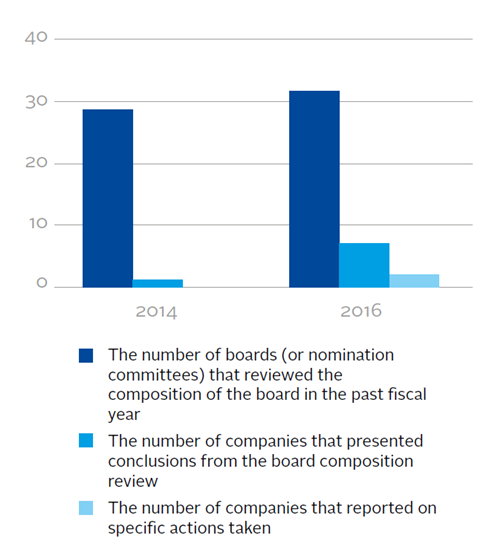 When compared to 2014, companies in the CAC40 have improved public reporting on skills, qualifications and attributes in 2016 compared to 2014. ISS found that in 2016 there were five additional French companies that started to disclose the skills and experience they generally seek for their board that didn’t in 2014.

Two of the companies that were engaged also improved their scoring. For instance, one company that had only indicated that they had ‘an appropriate balance in terms of skills and profiles on the board’ began to publicly disclose further information in the following year, ensuing investor engagement.

The company reported, “The board of directors benefits from the presence of “directors” from diverse backgrounds with complementary experience (including retail, financial, industrial, economic and commercial expertise), some of whom have in-depth experience and knowledge of the business, the sector and its environment both in France and abroad”.

Another company also improved its score by identifying specific skills and qualifications that they were currently searching for, stating, “Directors noted their desire to continue to reduce the number of directors as their terms expire, while aiming to achieve diversity in the board’s composition with regard to female members, age, nationality, profile and skills”.

As expected, company boards were keen to maintain the level of sectoral experience. For instance, one company in the financial sector indicated that it would give priority to people with banking and financial expertise.

Another company in the utilities sector indicated in their engagement dialogue that they had recently appointed a member with international experience as well as knowledge of big data. Overall, diversity and international experience featured most prominently as prerequisites in board searches. Entrepreneurial skills and digitisation were also considered important by some companies.

Interestingly, two of the engaged companies indicated that their board appointments were informed by recommendations they had received through board evaluations on the skills mix. Arguably, companies that take this approach will be better-placed to clearly articulate, in an objective manner, the strengths in the current board structure and how existing gaps in skills or expertise is being remedied. Such an approach also reassures investors that company boards have adequately considered the balance and effective integration of skills and experience on the board, rather than solely focusing on individual qualifications, however outstanding they may be.

In contrast to the US market, during engagement French companies communicated their priority to bolster diversity as well as international experience of director candidates. These shifts serve to demonstrate the impact of regulation, and places even greater emphasis on the need for engagement to further examine the suitability of candidates and appointments for an effective board. Gender diversity levels at boards of French CAC40 firms are now among the highest found anywhere around the globe.