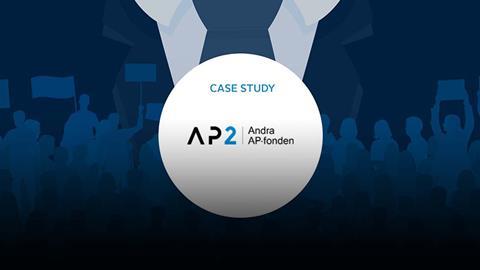 AP2 is a government agency, required by law to manage assets in an exemplary manner through responsible investment and ownership, with an emphasis on promoting sustainable development and human rights. The return characteristics of AP2’s strategic portfolio must meet the financial needs of the Swedish pension system.

In order to carry out our mission, AP2 aims to minimise the risk of contributing to adverse human rights outcomes while achieving our financial goals. To this end, the fund in 2020 adopted a human rights policy anchored in the UN Guiding Principles on Business and Human Rights (UNGPs).

The fund has a process for managing human rights risks in portfolio companies, based on due diligence and active ownership for non-listed assets, and on screening coupled with engagement for listed assets (described in this PRI case study).

However, in countries where the state not only fails to protect but also flagrantly violates human rights, there may be a very high risk of companies contributing to adverse human rights outcomes, either because the government compels them to directly, or more indirectly because the state has a weak legal system.

In such countries, AP2’s limited resources may not be sufficient to manage the risks in a responsible manner. If the fund deems it difficult to exert leverage to improve human rights conditions, a decision to avoid all listed investments in such countries, including sovereign bonds, might be warranted according to the UNGPs.

AP2 generally wants to include as many countries as practically possible in its benchmarks across all asset classes, given that diversification improves risk-adjusted returns. However, the fund has developed a country framework to systematically analyse whether there are financial, operational or human-rights-related reasons to consider not investing in certain countries. The general structure of the framework’s decision process is illustrated in Figure 1.

A financial reason not to include a country could, for instance, be low expected returns due to weak economic governance, whereas operational reasons might come into play if trading and settlement is very cumbersome or if the legal protection for investors is weak.

Using third-party quantitative analysis of multiple datasets, the fund screens all countries for human rights violations to identify those ranked among the worst in the world at protecting human rights. The data draws on many of the sources mentioned by the PRI in its report titled Human rights in sovereign debt: the role of investors, as well as on press articles and information from country-specific non-governmental organisations.

For each flagged country, a deeper qualitative analysis is carried out to better understand the human rights situation. This qualitative step often entails discussions with experts at think-tanks, specialised data providers, and political analysts. 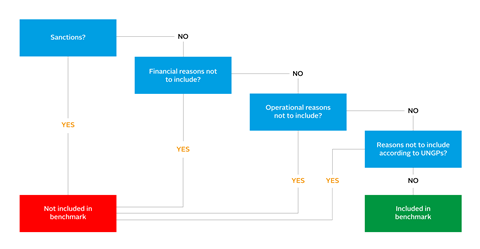 If there are no financial or operational impediments to including a certain country, but the state fails to protect or openly violates human rights, holding investments in the country could put the fund’s financial and sustainability objectives in conflict.

The country’s systematic importance for global markets, as well as return, risk and diversification characteristics will need to be considered in order to determine how important investing in the country is for attaining AP2’s financial goals. In line with Principle 19 in the UNGPs, the fund will consider excluding the country if it is not deemed crucial for the strategic portfolio and if it is difficult to help improve the human rights situation by exerting leverage in the country (either because of scarce resources at AP2 or because the authorities are hard to influence).

On the other hand, if the country is deemed crucial for the strategic portfolio, AP2 may decide to invest, while at the same time committing to using whatever leverage it can muster to improve the human rights situation. In such cases, the fund needs to clearly document its efforts and be prepared to communicate them as prescribed in the UNGPs.

An emerging market country that is a constituent in the most popular emerging market indices was flagged when screening the portfolio for extremely grave state-related violations of the right to privacy. The country had been popular for international investors in stocks, private equity and sovereign bonds for decades. AP2 assessed that the country generally had good economic prospects, and that trading and settlement was relatively easy.

In line with the process outlined above, AP2 undertook a deeper analysis of the human rights situation in the country, studying the legal framework, going through reports on violations, and consulting experts.

AP2 concluded that the government often violated the right to privacy on national security grounds and that it was very hard for companies operating in the country to avoid contributing to such violations, either directly or indirectly. Several other human rights were only marginally better upheld in the country. The poor protection of human rights had been a feature of the political system for several decades.

Analysing the importance of investing in the country, AP2 concluded that divesting was unlikely to materially hamper the fund’s attainment of financial goals. The assets invested in the country were marginal as a share of the fund’s total portfolio and could be reallocated to other emerging markets with similar risk-return profiles but better human rights records.

The government was generally open to meeting with and responding to international investors, and it would have theoretically been possible for AP2 to exert some degree of leverage to improve human rights conditions in the country as part of the international investor community. However, given the marginal financial importance of the country to AP2, the fund assessed it would not be reasonable to commit the amount of resources required to exert leverage in a responsible or satisfactory manner.

AP2 therefore decided to divest from the country’s sovereign debt and from listed equities in the country within internally managed portfolios. The fund kept its private assets in the country, however, as direct ownership allows for thorough due diligence and in-depth analysis of how human rights risks are handled in each investee company.

The country is now on a monitoring list together with other countries that have been excluded from the benchmarks for AP2’s internally managed portfolios of listed assets. Should the human rights situation in any of these countries improve in a significant and sustained manner, the fund would consider investing there again.