PIMCO’s proprietary sovereign ratings model starts with an in-depth, bottom-up country analysis. This analysis is based on five-year macroeconomic forecasts and specific quantitative ESG indicators, and considers both near- and long-term drivers of credit risk. ESG variables have a combined weight of approximately 25% in the model. Within ESG, governance (“G”) variables dominate, given that they are a leading indicator of sovereign risk. Social (“S”) factors, such as health and education, are less directly significant but tend to be highly correlated with initial conditions such as gross domestic product (GDP) per capita, which, in turn, is highly correlated with sovereign risk. Finally, we have found that environmental (“E”) variables on average are the least correlated with three- to fiveyear sovereign risk, with the exception of specific incidents (e.g., hurricanes, earthquakes, floods, nuclear fallouts).

We then explicitly score all sovereigns on each ESG component (see Figure 1). Each component is weighted equally and the quantitative score is supplemented with qualitative assessments. This allows us to take account of important ESG indicators. For example, progress toward the use of renewable energy or an increase in social tensions may not necessarily have an immediate impact on sovereign risk but are nonetheless important for long-term sustainability.

Finally, our country-specific scenario analysis assesses long-term trends and tail risks. We analyze long-term debt sustainability, resource depletion scenarios, natural disaster scenarios, political regime change, and contingency risks, incorporating both macroeconomic and ESG factors. Our country-specific scenario analysis helps enable us to identify which sovereigns are prone to left-tail risks, which have contingency plans in place, and which risks are material for investing. We believe it also gives us a better handle on latent risks, many of which tend to be associated with ESG variables.

In-country engagement is a critical component of our sovereign credit analysis and for assessing a government’s track record on ESG objectives. During our visits, we generally meet with senior government officials and politicians, focusing on the details of our credit assessment, which range from the composition of the budget and the management of foreign exchange reserves and monetary policy to progress on key development and environmental goals. We also generally meet with local business people, banks, consultants, trade unions, journalists, nongovernmental organizations, and members of civil society to get a broad, holistic sense of developments in the country. The discussions tend to be two-way interactions: the government updates us on its progress and plans, and our analysts and portfolio managers relay our concerns, assessments, and expectations to the officials.

Developments in South Africa over the period 2015–2017 reflect how integrating ESG into sovereign risk assessment can be used to potentially improve portfolio returns and shield portfolios from large downside risks.

In July 2015, allegations of corruption emerged with regard to former South African President Jacob Zuma. Criticism focused on a nuclear energy agreement between South Africa and Russia, which was believed to be engineered for President Zuma’s personal gain to the detriment of Eskom Holdings SOC Ltd., a South African electricity public utility. President Zuma was also accused of having a corrupt relationship with the Guptas, a prominent South African business family. A power struggle within the African National Congress (ANC) followed, resulting in a weakening of South Africa’s institutional framework, with frequent changes of finance ministers, fiscal slippage, and political turbulence.

When the allegations first surfaced, we initiated a reassessment of South Africa’s political and governance risks, and a senior PIMCO team made a due-diligence trip to the country. The objective was to understand the economic and institutional impact as well as the social consequences of the graft (e.g., the diversion of fiscal resources away from health and education). Following in-depth discussions with the government and a detailed analysis, we downgraded our internal credit rating for South Africa, several quarters before the major rating agencies did (see Figure 2). The weight of the governance indicators in our sovereign ratings, our assessment of the impact of weaker institutions on economic growth, and South Africa’s debt burden, and our engagement with senior government officials were key drivers of this decision. 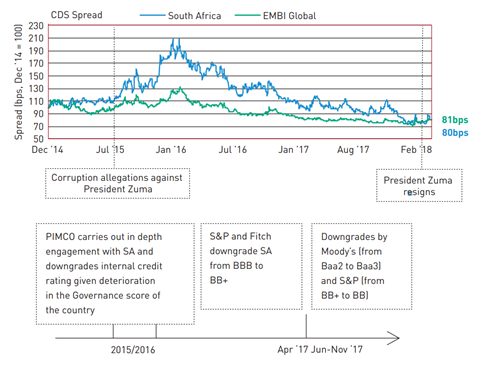 Our downgrade led us to reevaluate our portfolio exposure to South African sovereign and quasi-sovereign risk, and led us to make a call to reduce exposure across PIMCO accounts. Due to the integration of ESG factors in our standard sovereign risk framework, we were able to identify problems early and reduce exposure when the markets were still pricing in a favorable scenario for South Africa. Over time, as the extent of the corruption became known, the markets and the rating agencies caught up with our assessment. From 2015–2017, we remained engaged with the government and key stakeholders in South Africa. This enabled us to better understand the political dynamics and relay investors’ concerns directly to the key decision makers. Specifically, we emphasized the need for improved transparency and governance both within the government and in state-owned enterprises—especially in public procurement processes. As global macroeconomic conditions improved, the markets started to reprice South Africa positively, but our negative view on governance and transparency led us to remain cautious, particularly as there was a good chance that President Zuma’s policies would continue if his ex-wife, Nkosazana Dlamini-Zuma, won the leadership of the ANC. With the election of President Cyril Ramaphosa as leader of the ANC in December 2017 and the exit of President Zuma from politics in February 2018, we are monitoring the new government’s progress in correcting management gaps in the state-owned enterprise sector and advancing reforms to improve governance and transparency. The change in management at Eskom and the procedures being put in place to reduce corruption are promising signs that South Africa is finally on the long road to recovery.