Integration of ESG factors into sovereign bonds: a case study of Russia

Colchester Global Investors is a sovereign bond and currency manager. The factors that underpin its investment process are wide ranging, incorporating valuations and macroeconomic and financial analysis, alongside environmental, social, and governance (ESG) factors, as shown in Figure 1. Since the inception of the firm in 1999, responsible investing has been an integral part of the investment process, to better assess risk and generate sustainable, long-term returns. 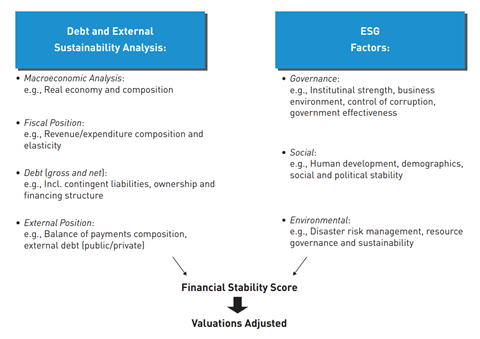 The integration of ESG factors is a holistic approach to investing and involves an enhanced analysis of sovereigns to better assess their ESG-related risks and opportunities. Colchester assigns a Financial Stability Score (FSS) to a country based on the overall balance sheet strength and ESG factors. The FSS ranges from +4 to –4 for those countries and currencies deemed to make it into the opportunity set and will lead to exclusion for those rankings below –4. However, the FSS is determined after a review of the ESG factors, and a strong sovereign balance sheet might be heavily penalized due to weak ESG factors. The following case study demonstrates how a country with a strong balance sheet can be significantly negatively affected by ESG factors.

At the time of this writing, Russian 10-year government bonds offered an attractive real yield1 of around 3% with a ruble undervaluation of over 10% versus the US dollar in purchasing power parity.2 This valuation needs to be considered in conjunction with a thorough balance sheet analysis and ESG factors to ascertain the underlying investment risk.

Figure 2 shows a sample of economic variables that would generally be considered in the analysis; it would appear to show Russia having a strong balance sheet. Economic growth is positive again since 2017, and inflation has fallen significantly from double digits to below 3%. Fiscal accounts are almost balanced, a primary surplus is expected by 2018, and gross government debt is low—below 20% of gross domestic product (GDP). Historically, oil revenues constituted around 50% of federal revenues but fell to around 40%. This narrow economic base is a vulnerability to the economy, as are the current economic sanctions.3 Conversely, the external position looks strong, with a rising current account surplus, low external debt, and high foreign currency reserves of almost 23% of GDP at the end of 2017. In conclusion, the balance sheet looks strong.

Russia’s balance sheet is strong but it faces weak governance

Figure 3 displays the six governance indicators, of which all are low (and most have not improved over time). The low and deteriorating scoring on the government indicator is not surprising, given the authoritarian government. Similarly, the rankings for rule of law and control of corruption remain relatively low and unchanged over time. This does not bode well for foreign direct investment inflows in the absence of clearly defined property rights, international sanctions, and hence, long-term economic growth. These factors significantly weigh negatively on Russia’s FSS and will be considered in conjunction with the social and environmental data discussed below. 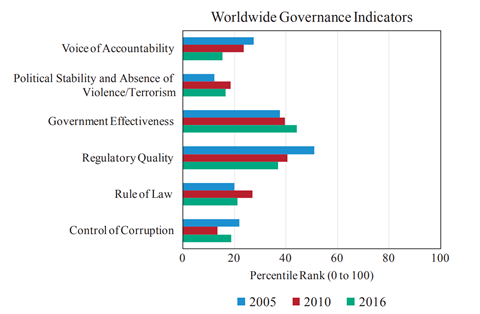 Russia’s Human Development Index (HDI) is high and has improved over time, according to United Nations’ data, while its life expectancy index lags behind all other subcomponents (Figure 4, Chart 1). This is also evident when comparing Russia to its regional peers (Figure 4, Chart 2). Reasons for the low life expectancy might be linked to empirical results from the Organisation for Economic Co-operation and Development (OECD), which suggest that life expectancy does not only depend on the health system and that higher national income and health spending are also main drivers. Findings are that a 10% increase in health spending per capita (in real terms) is attributable to a 3.5-month increase in life expectancy.6 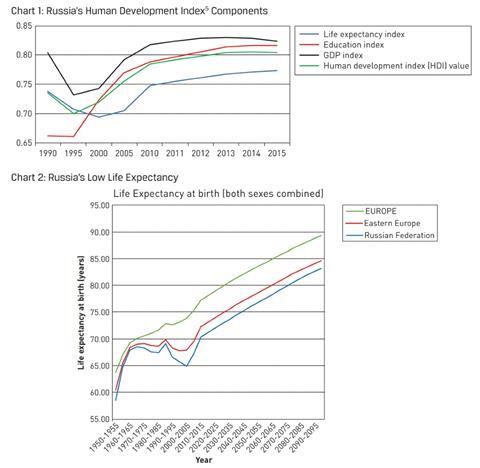 In the case of Russia, as a very high human development country,7 its expenditure of 35.7% of GDP is relatively low compared to the OECD-27 average of 45.6% of GDP, and the European Union-28 average of 47% of GDP as of 2015 (Figure 5, Chart 1). The expenditure breakdown shows further that other countries spend more on social protection, education, and health. In contrast, Russia appears to have a higher focus on defense spending. The future consequences of Russia’s low levels of health spending, coupled with an unfavorable demographics profile, might impact life expectancy more negatively (Figure 5, Chart 2). This, in turn, will reduce the overall future workforce, which will lead to lower productivity and future economic growth, and may likely impact sovereign creditworthiness negatively in the longer term. Again, the social aspect, while it does not have an imminent economic impact, will be unfavorable in the long term with regard to the FSS.

The Resource Governance Index (RGI) produced by the National Resource Governance Institute “assesses policies and practices that authorities employ to govern their countries’ oil, gas and mining industries.”8 Russia’s vast oil and gas resources allowed it to establish two sovereign wealth funds. The Reserve Fund was intended to top up the federal budget during falling oil prices, and the National Wealth Fund was dedicated to supporting Russia’s pension system long term. Unfortunately, as oil prices fell and deficits rose, the authorities drew on the Reserve Fund in 2015 and used the National Wealth Fund for economic stimulus purposes, instead of using these reserves for economic diversification efforts, future generations, and/or rainy-day savings. The Reserve Fund was almost depleted at the end of 2017, and the authorities decided to merge it with the National Wealth Fund. This highlights how natural resource revenue management impacts a country’s balance sheet. The RGI puts Russia at the bottom of its “weak” category (Figure 6). 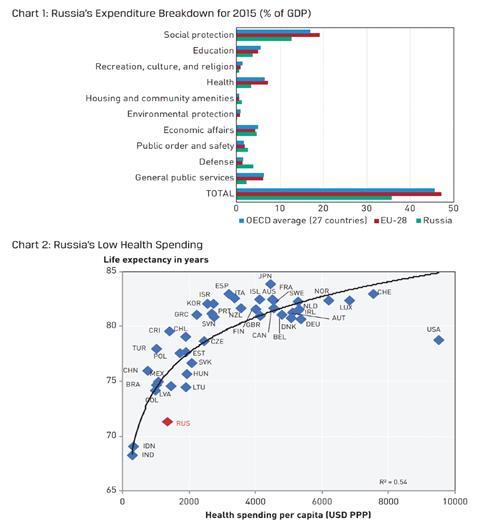 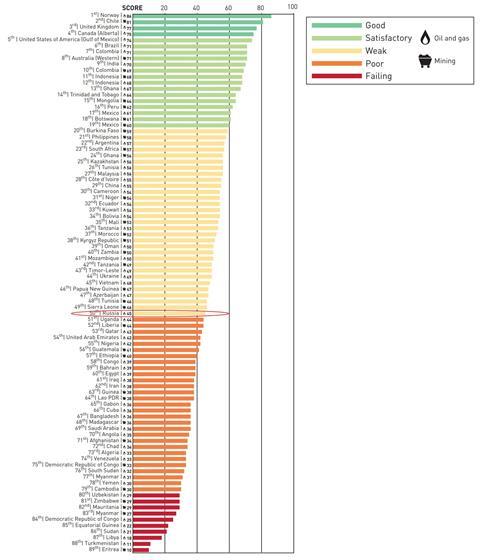 What Is Russia’s Financial Stability Score?

The analysis provided above indicates a solid balance sheet for Russia—low debt levels and relatively solid fiscal and external positions, combined with an attractive real yield of the sovereign debt, all of which would suggest an attractive investment proposition. However, Russia’s weak ESG factors led to a significant downward adjustment of the real yields and currency valuation via the FSS.

Colchester’s holistic approach to the integration of ESG factors via a detailed analysis of the balance sheet and ESG factors, as demonstrated in the case study of Russia, attributes an FSS of –4 (the lowest score) for Russia’s bonds and currency.

How does our Financial Stability Score affect our investment decisions?

Following our assessment of real yield and real exchange valuations, the FSS is applied prior to the portfolio construction process. Were there two countries with equal real yields, the one with the higher FSS would be favored, as it is reasonable to assume that a country with higher standards on all or some factors would have a better return outcome.

1 Real yields are defined as the yield on a government bond minus Colchester’s forecast of the next two years’ consumer price inflation.
2 Colchester calculates purchasing power parity by using country consumer and producer price indices, and foreign exchange rates.
3 Sanctions were imposed in the aftermath of Russia’s military intervention in Ukraine, which led to a plunge of net foreign direct investment by two-thirds during 2014.
4 The Worldwide Governance Indicators are a research dataset summarizing the views on the quality of governance provided by a large number of enterprise, citizen, and expert survey respondents in industrial and developing countries (Worldwide Governance Indicators: 0 = weak level of governance; 100 = high level of governance).
5 HDI considers three basic aspects of human development—leading a long and healthy life, being knowledgeable, and enjoying a decent standard of living.
6 Health at a Glance 2017, OECD Indicators.
7 High human development country, according to the Human Development Index.
8 https://resourcegovernance.org/sites/default/files/documents/2017-resource-governance-index.pdf, p.7 s