Engaging on anti-bribery and corruption

Given the increasing importance of the issue, a group of PRI investors participated in a coordinated engagement on antibribery and corruption between 2013 and 2015.

The main objectives of the engagement were to:

As well as helping to further improvements for the companies engaged, it provided an evidence-based standard for future engagements.

TI performed this assessment based on 13 indicators from TI’s publicly available Transparency in Corporate Reporting methodology. They also used five additional indicators generated by the investor group that aimed to capture companies’ commitment and culture around anti-bribery and corruption measures. Investors selected 32 companies for engagement around key areas of strengths and weaknesses identified by these 18 questions. Two years into the engagement (2015) each of the companies were scored again using the same methodology. 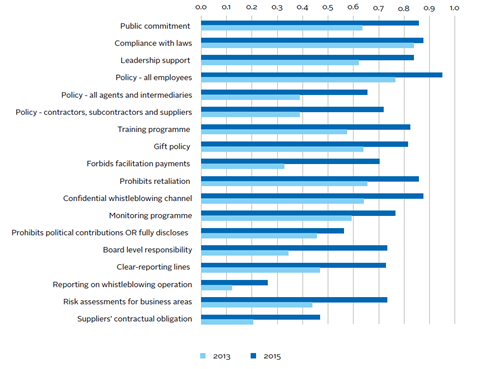 Which areas saw the most and least change?

The scores recorded by both pre and post-engagement on company disclosure of compliance with all relevant legislation, including anti-bribery and corruption laws, was high. In the context of the recent increase in national and international anti-bribery and corruption legislation and Governance codes, as well as the rising number of regulatory investigations, this observation is not surprising.

Scores that changed most during the two-year engagement were on: having a person present at board level responsible, and providing a policy prohibiting facilitation payments. Investors can expect positive results from engagement in these two areas. They both require senior level approval, but are clearly easier to report on than areas which require long term implementation, such as regularly reporting on the operation of whistleblowing hotlines.

Disclosing a code of conduct that applies to contractors, subcontractors and suppliers saw the next largest improvement in score

The three areas where scores changed the most through the period of engagement were focussed around policy and strategy. Quantitative scores improved less for indicators of implementation, particularly around companies’ monitoring and feedback processes. It is significant that disclosure of policies and compliance with laws are areas where substantial improvement is shown. Companies appear to be better at disclosing policies, than at monitoring and/or disclosing how those policies work in practice.

Investors used quantitative scoring followed by dialogue to engage with companies on more sensitive anti-bribery and corruption areas. Overall, across the 18 quantitative indicators, 13 concerned policy and strategy disclosure, while five focused on implementation. It is through engagement that investors are keen to discuss, in detail, how companies effectively implement their commitments, policies and strategies. Going forward, investors can deepen their engagement by balancing higher level strategy and policy areas with discussion on robust implementation, and how this implementation is evidenced.

Whistleblowing policies as a case in point

The results also uncovered an interesting juxtaposition between companies increasingly disclosing their provision of a whistleblowing hotline and non-retaliation policy, against reporting on the operation of the hotline (i.e. number and type of complaints made, whether the report was internal or external, resulting dismissals etc.) which scored relatively low and improved only for a few companies.

Where this was raised through engagement dialogue, investors explained that such disclosure is important for them as it helps to evidence that the line is being used and monitored. This indicates a healthy culture around the companies’ response to corruption risks. Several companies did provide robust clarification of their approach and, if applicable, gave reasons why they did not meet this indicator in their public reporting. Investors understood the need for companies to balance disclosure in such sensitive areas. However, they explained during the engagement dialogue that such disclosure is key to showing that the line is being used and monitored.

Engaging on anti-bribery and corruption