In 2019, the PRI commissioned a ground-breaking analysis of inevitable policy responses by governments around the world, to meet the 1.5 degrees Paris ambition. We released a paper outlining these policies, which along with the IPR 2019 Forecast Policy Scenario, lead to some of the world’s largest institutional investors and financial institutions committing to using it as a scenario. In 2020, we did it all again. The IPR 2021 policy forecast is a thoroughly revised and updated set of policy forecasts, reflecting even further detailed research on current and proposed policies, with input from a global survey of policy experts. This forms the basis for a new Forecast Policy Scenario later in the year.

The questions for risk forecasting are when this response will come, what policies will be used, and where the impact will be felt. IPR 2021 forecasts a response by 2025 that will be forceful, precisely because climate policy has been so delayed across the world.

Why is it inevitable?

What is the IPR2021 policy forecast and what does it do?

Markets have been highly volatile in the past year and determining what has been priced in or not sector by sector is complex. In the longer term the trends set out in the IPR FPS remain crucial for portfolio construction.

What makes IPR2021 different to other forecasts?

Through a robust real-world analysis that works up from the policy and technology developments that are already in place as well as those which are most likely to emerge, we forecast a number of key climate-related policy developments. In short, IPR2021 shows the policies which will have significant implications for the real economy and society within the near term.

This paper outlines and explains the basis of the forecast, details the expected policies and outlines when they will come into effect in each of 21 countries representing 78% of economic activity, 74% of energy use and 77% of CO2 emissions.

Since our landmark IPR 2019 policy forecast, governments around the world have realised just how urgent stringent and robust climate policy action needs to be to avert the dramatic effects of climate change which we are already witnessing today. A number of countries, cities and corporates have pledged ‘net zero’ emissions and a host of other climate policies have been implemented including even more countries committing to phasing out coal from their power system, banning the sale of ICE vehicles and even more ambitious carbon pricing regimes.

Since 2019, major net zero commitments and new climate measures in leading countries have raised prospects for an accelerated policy response

Although 2020 was a big year, the Paris Agreement ‘ratchet mechanism’ – starting with the Global Stocktake 2023 and leading to the third round of climate pledges in 2025 - increases the likelihood that policy announcements to tackle climate change will accelerate even further within this period.

Pressure for policy action will continue to increase and come from all angles – environmental, social, and economic. Upward pressure will come from electorates and businesses and be further fuelled by fears over national security. Perhaps most critically, such a rapid policy shift is further enabled by advances in technology cost and performance, and the drive by major economies to lead in these emerging industries. 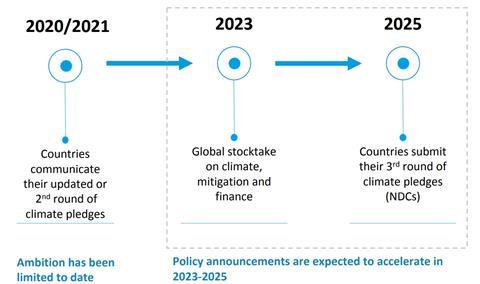 Over the past 12 months, a team of researchers at Vivid Economics in collaboration with Energy Transition Advisors and climate policy experts across the consortium, undertook research that followed a robust and transparent approach along the following principles: 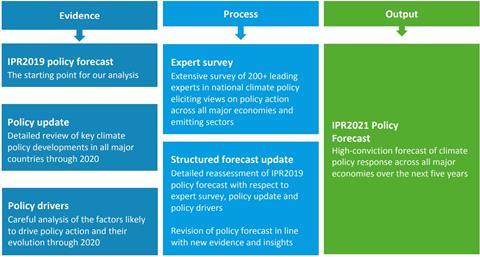