Financial markets today have not adequately priced-in the likely near-term policy response to climate change. The Inevitable Policy Response (IPR) is a pioneering project which aims to prepare investors for the associated portfolio risks.

A collaboration between PRI, Vivid Economics and Energy Transition Advisors

Government action to tackle climate change has so far been highly insufficient to achieve the commitments made under the Paris Agreement, and the market’s default assumption appears to be that no further climate-related policies are coming in the near-term. Yet as the realities of climate change become increasingly apparent, it is inevitable that governments will be forced to act more decisively than they have so far.

The question for investors now is not if governments will act, but when they will do so, what policies they will use and where the impact will be felt. The IPR project forecasts a response by 2025 that will be forceful, abrupt, and disorderly because of the delay.

In anticipation, PRI, Vivid Economics and Energy Transition Advisors are building a Forecast Policy Scenario which lays out the policies that are likely to be implemented up to 2050 and quantifies the impact of this response on the real economy and financial markets. From late September we will be publishing detailed modelling of the impact:

Investors need to act now to protect and enhance value by assessing the implications of the IPR Forecast for portfolio risk. The greater the delay in responding, the greater the potential cost.

What makes the IPR forecast unique?

The Forecast will provide investors with a unique tool for navigating a complex, evolving policy and regulatory landscape – to enhance portfolio resilience and inform strategic asset allocation.

The preliminary results will be the first step in an ongoing process, as we continue to update and refine our modelling in response to major external developments and with feedback from stakeholders.

Our forecast of an Inevitable Policy Response provides an alternative to the IEA as a business planning case for investors, corporates & regulators to consider 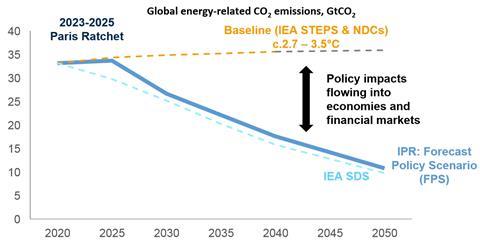 How can climate policy be realistically forecasted in the near term?

There are few signals that governments will act forcefully on climate change in the next 2 years. But this situation is not sustainable – and 2023-25 is the critical period.

The realities of climate change will inevitably catch up with governments across the globe – and they are beginning to. Pressure for policy action will continue to increase and come from all angles – environmental, social, and economic - fuelled by fears over national security; enabled by advances in technology and upward pressure by electorates and businesses to act.

Far more so than in the past, these triggers are aligning actors in a common direction. At the same time, the Paris Agreement ‘ratchet mechanism’ – starting with the Global Stocktake 2023 and leading to the third round of climate pledges in 2025 - increases the likelihood that policy announcements to tackle climate change will accelerate within this period. 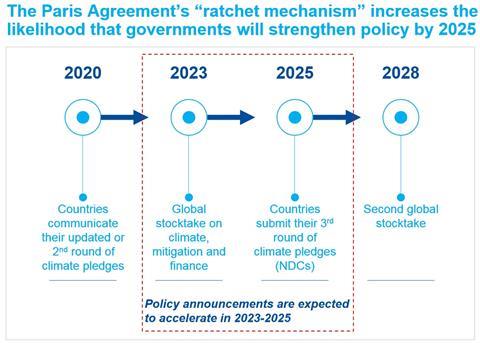 The most likely policy levers that governments will use to tackle climate change are starting to emerge. The IPR project analyses in detail the policies we expect to see, and where they will have impact.

They include bans on coal, and on internal combustion engines; an increase in nuclear capacity and bioenergy crops; greater effort on energy efficiency and re/afforestation; wider use of carbon pricing and increasing the supply of low-cost capital to green economy projects. The full details of this analysis will be released at PRI in Person.

PRI will be running a programme to support investors in how to do this, to get involved contact us at IPR@unpri.org

Aspiring to 1.5o C: How does the IPR forecast relate to limiting warming to “well below 2o C”?

As the IPR forecast is primarily aimed at demonstrating latent risk in investor portfolios, it differs from climate scenarios by working up from probable policy and technology developments, rather than working back from a pre-defined target temperature.

For those that aspire not merely to better price in policy developments, but to themselves contribute to goals such as the Paris Agreement target of limiting warming to 1.5o C, or to reach net zero emissions by 2050, the PRI encourages such ambition. The IPR forecast highlights the challenges such an ambition will need to overcome given current political and technological realities, and pinpoints specific areas where stakeholders need to act now to achieve such goals.

Reaching a <1.5o C outcome is a far bigger challenge - but should remain the aspiration