Moving the needle on responsible labour practices in the apparel industry

Adverse human rights issues and impacts are found throughout the supply chain.

Incidents of forced labour are prevalent – from cotton picking to apparel manufacturing around the world – in both developed and developing markets. The growth in migrant workers has also fuelled labour exploitation within the sector. 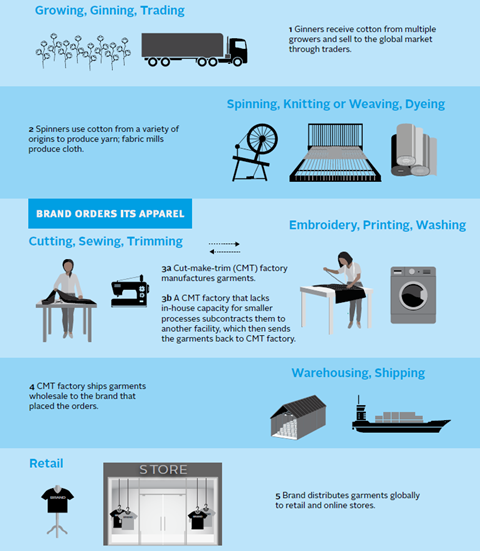 Stage 1 of making a t-shirt: raw materials sourcing and production

In both the ‘growing, ginning and trading’ phase and the ‘spinning, knitting or dying’ phase of the supply chain, there are risks associated with sourcing cotton14. Cotton harvesting tends to be labour intensive and often sourced in countries such as Uzbekistan, Tajikistan or India where there is a lack of enforcement of national law and forced and child labour is prevalent. Cotton workers are also exposed to health and safety hazards, including pesticide contamination.

The risk of child labour, forced labour and human trafficking are also prevalent in the cutting, sewing and trimming phase (Phase 3 in the diagram illustrated above). These issues are often more difficult to identify because of the opaque nature of the supply chain, especially as they may occur deeper beyond tier 1 suppliers, challenging the visibility and oversight, e.g. among sub-suppliers or homeworkers.

Spotlight on migrants: workers on the move

Adding to the complexity in both the early stages of the supply chain and the manufacturing phase, is the use of refugees and migrant workers, including children. In Turkey, the third largest textile exporter to the European Union in 2013, migrant children and Syrian refugees are at risk of child labour, forced labour and are often subject to recruitment fees. A recent media expose highlighted sweatshop conditions in Turkish garment factories, putting the reality of abuse and exploitation of Syrian refugees on the agenda for brands, retailers, consumers, and not least investors. However, forced labour in the apparel sector also occurs in developed countries. For example, migrants from India, Pakistan and China were found to be forced to work in textile factories in Spain and Italy. Specific labour issues arise within certain regions affecting both domestic and foreign migrant workers, so companies need to understand their own particular operating context and risks in regions from which they are sourcing. For example, in India, companies are increasingly aware of Sumangali practices, a form of child labour where young unmarried women are recruited from rural villages to work in spinning mills for a number of years and receive a lump sum towards the end of the contract.

Stage 2 of making a t-shirt: manufacturing

In the manufacturing stage, a number of human rights risks include:

Workers often lack both an understanding of and access to their human rights as they tend to be low-skilled and come from rural or low-income communities. Challenging political environments in which civil society organisations and trade unions are not accessible may also risk limiting workers’ voice. Some unions may also be connected to political parties which can make the labour unions more aggressive and militant in their demands.

Companies carry a responsibility to identify and uncover these issues, and implement ways to manage them. Where workers are not aware of or are unable to exercise their rights, companies can focus on educating workers, providing awareness-raising programmes, training and local capacity building.

As the majority of garment workers worldwide are female, they are often subject to a lack of gender rights. Issues such as sexual harassment in the workplace and a lack of professional development, childcare and hygiene and sanitation facilities are realities for many garment workers. These clear human rights impacts fall under the corporate responsibility of companies to respect and if processes to mitigate these issues are not in place might link to wider risks to investors.

Spotlight on a decent standard of living: the importance of a living wage

In many apparel sourcing countries, the current minimum wage is insufficient to meet the basic cost of living. The absence of industry wage bargaining has left workers reliant on ineffective minimum wage mechanisms for wage increases. This puts them in a weaker position, and factors such as faster turnaround pressure and shorter lead times can increase the risk of exploitation.

Workers are also often subject to a living wage gap, in which living expenses are growing faster than wages. For example, in China it grew from 6% in 2015 to 11% in 2016 (based on living wage estimates provided by the Asia Floor Wage). Often, companies do not distinguish between a living and minimum wage which can pose a risk to investors, as it is unsustainable for a business model to rely on underpaying workers. Sustaining a living wage can translate into operational benefits reflected in improvements in turnover, retention, absenteeism and morale. To encourage this, investors can ask for companies to integrate fair and responsible hiring policies and practices into corporate-wide operations and supply chains, and encourage companies to encourage suppliers to provide a living wage.

Moving the needle on responsible labour practices in the apparel industry